There you are. Still sitting or standing in almost the exact place where I left you all those many years ago when I used to commute daily to my previous job at the travel agency. There's a difference, though. These days a gigantic name hemming you in in a semicircle advertises a well-known brand. This is the trade-off. You give up your secretive, quasi-illegal status and in exchange you get to be part of "Carling Live Underground Music". You probably hate this deal. Even the less-than-subtle wordplay is platitudinous.

The first time I saw you I had to stop. Your voice sounded so clear. Was it a cover of Tracey Chapman's Talkin' Bout a Revolution or Radiohead's Karma Police you were singing? After that moment whenever I spotted you or one of your compadres or comadres (yes, I noticed there were women, too), I would take my earphones off and allow myself to be sucked into your vortex. Your music, early in the morning rush-hour, was like a short, wake-up whistle that shepherded me and my fellow commuters around you for a few seconds. Occasionally we dropped coins in your empty guitar case. Today as I head for a conference, I can see you've plumped for Coldplay's middle-of-the-road anthem God Put a Smile Upon Your Face. I'll tell you what, I couldn't give two hoots about the so-called Creator, but you are putting a smile upon my face now.

It's not always a guitar you carry these days, you and your fellow musicians have diversified. For example I just saw an accordeonist in King's Cross, a fiddler in Oxford Circus and a drummer in Piccadilly. The latter was particularly impressive. His long dreadlocks swung widely from side to side as he regaled passers-by a simple beat, probably not as complex as what he usually perfoms at Womad in the summer with his band.

I've often wondered, as I see you now starting Girl from Ipanema yet another time, what your dream is. I sometimes imagine you playing in a pub at the end of your hard working day, after having sung Tom Jones' s It's Not Unusual half a dozen times, belting out one of your own songs. Not a fast, loud, one-hundred-decibel tune, but maybe a smooth, acoustic melody that talks about anonymity and determination. A composition that might even mention rejection and struggle. And as you sit there, on a stool placed on an improvised platform, I think of you and your voice as a whistle, luring commuters to you, even if it is for just a couple of seconds. You, shepherd. You, busker.

Next Post: “Sunday Mornings: Coffee, Reflections and Music”, to be published on Sunday 7th October at 10am (GMT) 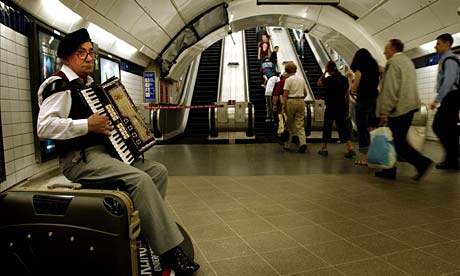