There was a brilliant scene in the recent satirical show, The Revolution Will be Televised, (BBC3) in which the programme creators, Joylon Rubinstein and Heydon Prowse, walked separately around a park asking people what at first appeared to be very unusual and risqué questions. Do you want to be my friend? Can I poke you? Is it OK if I show you some photos of my latest holiday? You might know a friend of a friend of a friend of a friend’s; is that enough for us to become friends? Passers-by who were confronted with this line of innocent interrogation had various reactions. Some told the pair to get lost (remember that they were acting their roles separately, so that was a lot of getting told to get lost), some saw the funny side of Rubinstein and Prowse’s questions but were still reluctant to swallow the bait and welcome them in their group. Others (a very small amount) were more trusting and engaged in conversation with the comedians. 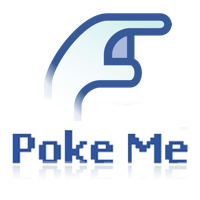 What was obvious to anyone watching the show was that the only thing the pair were doing was bringing to life the ways in which people interact on Facebook. By using phrases such “Can you like me?”, “Let me poke you/can you poke me back?” and “Can I be your friend/can you be mine?” they were demonstrating the absurd dichotomy that exists between our real life selves and the personas we create online.

As a Facebook, Twitter and, of course, blogger user myself, Rubinstein and Prowse’s stunt had me in stitches. I not only laughed at the mixed reactions they faced (some members of the public were very irate) but also at the way most of us are unintentionally partly responsible for this discrepancy between actual and virtual self.

We have disassociated ourselves so much from reality that we have ended up empowering corporations to build our personalities for us. It is an unbelievable state of affairs and one that gets brushed under the “innovations and technological advances we can’t do without” carpet.

To be clear, if we talk about inventions that changed the world and without which we wouldn’t be able to operate in the efficient way we do nowadays, the steam engine, the telephone and the aeroplane must be at the top of the list. LinkedIn would come a distant 528th (if). In fact, I would consider the internet itself as one of those indispensable inventions that’s proved its value many times over. However, what we’re seeing nowadays is the infantalisation of adults under the pretext of personalisation. Especially online. This personalisation is a marketing trick, a ruse to make grown-ups believe that what they’re buying into is the freedom to express themselves. The irony is that in the process many of us relinquish the very freedom we think we’re acquiring. Google nowadays looks more like a Stasi agent from the former German Democratic Republic than the cutting-edge company it once shaped up to be. Its Google maps function was never truly embraced by many of its devotees and the web search engine giant has been accused of snooping into people's private lives. In another episode of The Revolution Will Be Televised, Joylon Rubinstein and Heydon Prowse visit people in their homes and ask them to allow them in in order to film them. Like the Facebook stunt, their request is simple: Can I turn my camera on you whilst you have a snooze in the middle of the day and then show it to your prospective boss? Again, the responses were varied but it never crossed these people’s minds that many of them were already doing that online.

Some of us have fallen for this personalisation trick so often that we’ve accepted social networking websites, smartphones and state-of-the-art e-readers as “essential inventions”. We’ve forgotten that more than thirty years elapsed between the first telephone and the first sustained and controlled heavier-than-air powered flight. Not even two years went by before we started texting LOLs and OMGs to each other on our mobile phones.

That it’s taken one of the better satirical shows to have aired on the BBC in recent years to highlight this phenomenon should not be surprising. Comedy is in the unique position of making some serious points without coming across as too po-faced or prescriptive. Saying that, though, the pranks carried out by Rubinstein and Prowse pack some fair punches and could, if we wish, become part of a manifesto for a more equal society: the GUBOFMYC campaign against the bankers (please, do look up the acronym online and ROTFFL. I can’t bring myself to spell it on my blog as I don’t normally include swearwords in my posts) is hilarious, if sadly true and the issue of tax avoidance makes one want to cry. Not out of laughter, though.

So, now you know. Next time you see a bloke with a giant cardboard hand cutout trying to poke you in public, don’t freak out. Just ask yourself: wasn’t that exactly what I was doing last night?

Labels: A Cuban In London, Betty Carter, Cubans in London, Facebook, Heydon Prowse, How High The Moon, Joylon Rubinstein, music, The Revolution Will Be Televised, Twitter