A few weeks ago I found myself lying on my back on a stretcher, being wheeled into an operating theatre for the first time in life. An annoying and rather clingy sty had fixed its abode on my lower eyelid in July last year and despite trying to massage it off by pressing a warm flannel against it, the abscess proved quite stubborn to get rid of. I know that the housing situation in the UK is not in the best of shape at the moment, but surely this was not the kind of tenant I needed even if there'd been space for building a house on my lower lid.

It was a rather grey day with the first heavy snowfall of the season forecast for later on. I arrived at the hospital by bus and planned to return home using the same method of transport. At no point did I fret over the operation. In fact, I still recalled my GP's words when she first saw me last summer and the phrase "laser the sty off" kept coming back. So, I carried on thinking that the procedure would be quick and painless. A radio with the station Magic FM was on with Queen's We are the champions playing to the whole ward. The signs couldn't have been more encouraging.

And yet, life always has a card up its sleeve.

If you're squeamish about operations, please, look away now and come back in the paragraph after next one.


First my lower eyelid was numbed with local anaesthesia. Either I failed to see the size of the needle or the doctor did his best to hide it because at no point was I afraid about an area so close to my eye being lightly perforated. By the time he'd said: "You're about to feel a little prick", he was done. Thus, a wave of optimism  caught hold of me. This was going to be just fine. I would be home in time for Gillette Soccer Saturday. How wrong I was. The surgeon set to work and all throughout the process he kept talking to me, giving me encouragement and maintaining my spirits high. My upper eyelid was raised and held all the way back with a small clamp to prevent me from blinking. When it was touched lightly by one of the nurses, my whole body went floppy. I couldn't raise my arms nor move my legs. I'd passed out partially. Drifting in and out of consciousness I kept hearing the doctor and nurses calling out my name. An oxygen mask was placed on my face and a cold flannel on my forehead. My neck was lowered whilst the rest of my body remained flat on the stretcher to get the blood circulating again. My jumper was rolled up, including its sleeves, to allow cool air ventilation. At some point I mustered enough strength to signal to the surgeon and nurses to raise my legs so that the blood could circulate more easily but they couldn't understand what I was trying to communicate. As it was explained to me afterwards, my blood pressure and heart rate had plummeted to dangerous levels.

I was kept in hospital for about three and a half hours after under observation. During this time I had enough time to think about what'd just happened. I'd never been so close to... death? No, that's overplaying it a bit and besides, that's a subject for another column. But, indeed, I'd never been so close to... this state of dependency, of almost total immobility. To be clear, when I was a child, I was in and out of hospitals in my native Havana, but since becoming an adult and especially since getting so legless once, many years ago, when I went out to celebrate my graduation from university with my friends, I'd never experienced an episode so dramatic as this one. And yet, I also found a humourous side to it. Whilst semiconscious, Gloria Gaynor's I Will Survive blasted out on Magic FM. As soon as I came to, I asked the doctor if that was the track that was playing during my ordeal and he smiled at me and said: "Yup, you weren't totally out of it, were you?" I also reflected on my decision to watch a programme on Dali the Sunday before on Sky Arts whilst doing the ironing (it's a habit of mine, either arts or football, but nothing is better when you're pressing clothes than watching telly) and the first scene of Luis Buñuel's Un Chien Andalu, which as everyone knows opens up with someone slicing their eye. Yes, idiot, I'm an idiot. What next? Watch Airplane before flying to Cuba?

But of whom I thought the most that day as the afternoon put on its grey cape earlier than usual, was the personnel tasked with my well-being and us, the beneficiaries. From the - mainly - Filipino nurses who fussed over me as if I was a six year-old child to the doctor who talked me away from my trauma by discussing fishing in Cuba (including the ubiquitous legacy of Hemingway and his The Old Mand and the Sea) the staff were magnificent, caring in their approach and professional in their delivery. And we, the patients in that ward, reciprocated in equal measure. It made me think of the future of the NHS in this country and the current threat that the coalition government poses to it. 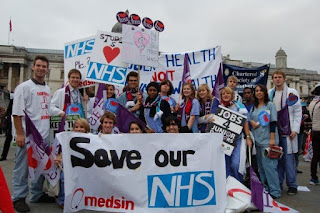 As I write Prime Minister David Cameron and his gang are trying to push a bill through parliament which could alter irreversibly the way the National Health Service is run in the UK. Words and phrases such as competition, efficiency-saving (namely, cuts), choice, decentralisation of power and other jargon are being used as a carrot to entice practitioners to believe that they're being given more power.

In reality what's happening is that the government is bent on expanding private provision of our free health service, probably copying the US model. If the bill becomes law, the NHS will be torn open and left exposed for the vultures of the corporate sector to feast on its entrails. The juiciest contracts will go to the richest firms which will be in a better financial position to bid for them. Joe and Joanna Public will be left with a local hospital that will resemble the landscape in the novel The Road. We'll probably even get the cannibals as a side dish, too.

Cameron, Andrew Lansley (the health secretary) et al don't get it. When we, taxpayers and those who benefit the most from a free health system, hear ministers talking of value, trade-offs and deals, we fight back, sometimes even using methods that might be thought of unorthodox. A hospital differs from a hotel in that the former is driven by response to need and not by a desire for leisure as in the latter.

It's very likely that the NHS will cost the Tories the next election (although bearing in mind that the next time we'll go to the polls will be in 2015, that might be a little bit of wishful thinking on my part) and that Andrew Lansley won't be in charge of the health system by then. He has conducted himself in a most unsympathetic and callous manner. My biggest fear is that by then it will be too late to reverse some of the changes that Cameron wants to introduce now.

Last week I mentioned my apathy towards marches and demonstrations and how it came about. I should have added, if only to balance things off a little, that I do have joined online campaigns and petitions. One of the reasons I feel proud to carry a British passport and call myself a "naturalised British citizen" is because this country has an efficient and fair health system where everyone, regardless of colour, sex, gender, sexual orientation or age can be treated without paying one single penny. Perfect, it is not, and I'd be the first one to say that a lot needs to be done. But let's not throw the baby with the bathwater. Increasing competition and changing the ways services are commissioned is not the solution. The result will be more inequality.

Thinking back to my experience in hospital, I imagined Gloria Gaynor's I Will Survive as a response from the NHS to the Cameron-led government with each line being sung by a different member of the public to the Conservative-LibDem cabal: Go on now go walk out the door/just turn around now/'cause you're not welcome anymore/weren't you the one who tried to hurt me with goodbye/you think I'd crumble/you think I'd lay down and die/Oh no, not I/I will survive//as long as I know how to love/I know I will stay alive/I've got all my life to live/I've got all my love to give/and I'll survive/I will survive. I invite you, dear reader, to join me in this chorus.