One day last summer my wife, our two children and I were walking near St Paul's Cathedral when we decided to sit down on one of the many benches scattered across the churchyard in order to have our packed lunch. I've always liked St Paul's, the outdoor area, that is. If you want to see what the inside of the cathedra looks like, you have to cough up at the entrance. Still, the exterior is beautiful with well-looked-after lawns and shrubbery, although on the day we went there were still some scaffoldings dotted around the premises. Outside, the visitor will also find useful information about the cathedral's history and some of the pieces that populate its grounds. A triangular relief describes the conversion of the building's patron saint to Christianity. St Paul himself stands above said sculpture, sandwiched between other religious figures. A statue of Queen Anne, the reigning monarch at the time St Paul's was built sits nearby. Accompanied by a soft, gentle breeze this summer day could not have been more relaxing. And I gather that the same thought crossed the mind of the many visitors streaming through the cathedral's gates. 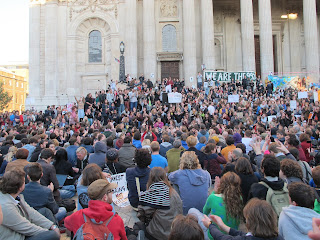 I suppose that neither the church's authorities nor the families parading or playing on the building grounds that day would have been able to predict that a few months thence St Paul's would become another chapter in the global protest movement.

But before I carry on, a disclaimer. I haven't yet, at the time of writing, paid a visit to the Occupy movement at St Paul's Cathedral. I would like to, but, for reasons I will explain later on in this post, I still haven't made up my mind. I have, however, followed with great interest the wave of protests, uprisings and insubordination that has engulfed the world in the last twelve months.

It's sometimes hard to believe that we're living in one of the most radical(ising) times in history. The difficulty to understand this arises perhaps from the fact that we're used to listening to older people talk about past conflicts in such a  passionate and heart-rending way that only if we're able to put on the rose-tinted lenses of nostalgia (the ones our elders are surely wearing as they tell these tales), will we able to to experience something akin to their memories. Another reason might be that our attention span has grown shorter whilst our technology has developed tenfold. The combination of these two factors has somehow eroded our ability to marvel at our own derrings-do. And yet, look at what's happened in the world in the last year socially, politically and economically and you'll come to the same conclusion as me: there's been a revolution.

I use the singular form on purpose, even if the popular unrest that has coursed through the globe in the last year has manifested itself plurally. North Africa has just seen an overhaul and overthrow of old regimes. Syria is the next stop surely. The Occupy movement which began life in Spain with "Los Indignados" (The Outraged) mushroomed instantly and took hold of other cities such as Toronto, New York and London. Online, groups like Anonymous are bent on embarrassing national governments with their pranks. Everywhere you look there's something happening or about to happen. However there's a single narrative running through these subversive acts that seem to have sprung up almost simultaneously: a fairer society where there's more respect and consideration towads our fellow humans. The question is: why now?

My answer is: people got fed up. As anyone who has a cat will tell you, if you corner your feline pet, it will defend itself, with very ugly results. That cuddly, cute kitten will morph into a panther or tiger in less time than it takes you to say "Meow!". Same with people. Over the years we've seen the rich getting richer and very little of of that wealth trickling down to us, regardless of what New Labour promised when it came to power. The clearest message I've seen in the current protests, and the most explicit and bluntest one has been: "We're the 99%!". And as it happens, 99% is far more than 1%, so, you do the maths. Just like Seattle at the end of the 90s and beginning of the noughties, gave us a strong anti-corporation message, this time the Occupy movement, combined with the uprisings in Arab countries is providing a template for how future battles between the status quo and the electorate will be fought.

First of all, social media has played a very important role in the current stand-off between state and individual/collective. It's easy to big up Facebook and Twitter and overestimate their involvement in the toppling of Gaddafi and Mubarak but according to Paul Mason in his new book, Why It's Kicking Off Everywhere, there are now nearly one billion FB users: two fifths joined since the start of the Arab spring. In about four days Paul reckons the 500 millionth Twitter account will be created; the 400 millionth one was opened four months ago. Whilst Mark Zuckerberg will find it difficult to convince people that he unseated the Egyptian dictator himself whilst wearing his PJs and slippers, it's fair to say that his creation did have an effect.

The second element that signals we're entering a new era in the relationship between government and people is the leaderless nature of the Occupy movement. Decisions are made following assemblies. Real consultations are carried out by talking to members. There's a sense of ownership that's hardly ever present when politicians turn up on the panel of Question Time or to answer questions on the Today programme. Furthermore, the roguish behaviour displayed in Seattle by some members of anarchist organisations are conspicuous by their absence at St Paul's cathedral. This lack of unlawfulness in the Occupy movement has endeared people with no political ties or motivation to the protesters' aims.

There's a third factor in the relative success of both the Occupiers and the progressive forces responsible for toppling down the dictatorships in north Africa. They haven't mentioned the "s" word as an option for governance. "S" as in "socialism", that is. The protesters taking over squares, parks or, as in London, cathedrals, want a different type of capitalism. They want a capitalism where profits do not end up in the shareholders' pockets - at least, not all of them - but benefitting society as a whole. By all means, keep capital, but do not capitalise on the human soul.

Could this new approach to politics and government triumph in the end? Not in the long term, in my humble opinion. But in the short one, what is doing very effectively is making people, politicians included, re-assess their priorities in life. In the same way Seattle '99 exposed the harsh realities of sweatshops and unethical trade, the consequence of the Arab spring has been a re-evaluation of the role of the West in propping up and knocking down dictators as and when it wishes. Not so long ago Tony Blair shook Gaddafi's hand. And lest we forget it was Mr Blair who joined George W Bush in the illegal invasion of Iraq. The less we see of that kind of attitude the better, and the Arab movement is contributing to that change of mindset. Another effect of the global protest movement is making people understand that the current state of affairs affects almost everyone: from small business owners to young people looking for work. There's a real drive towards creating a better and fairer society and it's encouraging to see the new guard partially leading the way. I wish I could join them, but having been born and lived in a country where demonstrations were ten a penny, had no real or political purpose and brought no change at all, I have sadly become inured to public displays of dissent.

I do confess, however, that leaderless movements with a loose agenda make me somewhat anxious. That way madness and anarchy lie. A hodge-podge of ideas as springboard for a more coherent and cogent arguments is very welcome. The danger is that historically out of the chaos come totalitarianism and autocracy, being led, ironically, by a charismatic demagogue. I don't think the Occupy movement is heading that way yet, but at some point, I think it should narrow down its political, social and economical demands to something we, the public, can recognise and vote for. Given the grim future facing many in the UK nowadays, even Jesus would have joined the protesters at St Paul's cathedral. Which, by the way, taking into account the church's attitude towards the Occupy movement, would have been very funny.