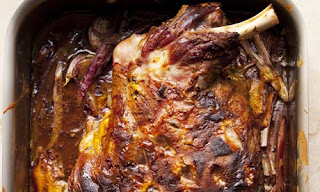 Emboldened by my recent experience of cooking a roast pork loin for a large number of people on New Year's Eve, I'm gearing myself to repeat the experiment soon with friends and relatives. As you know I'm a big fan of the slow-cooking approach and nothing tastes better than meat coming off the bone at the first stab of my fork.

Although the words below are by Nigel Slater, the recipe isn't. It's by James Ramsden and judging by what I have read about him and his cooking methods, it looks as if this is one of many dishes to be shared with you, readers and fellow bloggers.


Chunks of meat are all well and good, but few things beat a whole joint, slowly roasted on the bone until the meat slides away at the slightest prod. Lamb shoulder is arguably the king of such joints. It's tough as old boots, but so perfectly fatty that when sympathetically cooked the fat melts through the meat, tenderising and oozing flavour throughout the flesh.


Using a sharp knife, slash the lamb a few times – no deeper than an inch – on the fatty side. Mix 250g of the yogurt, lemon juice, ras el hanout and smoked paprika in a bowl and season with pepper. Spread the onion out on a roasting tin, throw in unpeeled garlic cloves and place the lamb on top. Rub the lamb with the marinade, pour over the wine, cover and leave – 24 hours would be ideal, an hour will do.


When ready to cook, preheat the oven to 170C/gas mark 3. Season the lamb with salt and drizzle with oil. Cover tightly with foil and roast for 3 hours. Remove the foil and roast for a further half-hour. The shoulder blade should be peeking out from under the end of the meat.


Remove from the oven and leave to rest, loosely covered with foil, for half an hour. Meanwhile, cook the couscous according to the packet instructions. Pull the meat apart with tongs, garnish with the pomegranate seeds and coriander, and serve with a spoonful of the cooking juices, the couscous and the remaining yogurt.

Soul. That was the first word that came into my head when I read Nigel's words above. And the first track I've chosen to accompany this dish is by new soul boy, Gregory Porter. I heard him on Jazz FM recently and his voice slashed through me like a knife cutting through the fatty side of the lamb's shoulder. It's a mix of good ol' Curtis Mayfield, Donny Hathaway and Marvin Gaye, but with his own style and groove. Can't wait to get my hands on his album. Bon appetit!

If Gregory Porter is soul, then Sivert Høyem is passion, plus soul, too. Prisoners of the Road came on the radio a few days and by the time it'd finished I had another browser open on youtube trying to gather information about this artist. Listening to this guy's voice is like watching the lamb roasting slowly. I hope you enjoy this song as much as I do.

Anoushka Shankar's album Traveller led me last year down a path of traditional India music and flamenco hybrids, of which Indialucia is one of the more skillful exponents. This little hot number called Rumba oozes flavour through every pore like that roast lamb's shoulder. Tasty.

Recipe taken from Small Adventures in Cooking by James Ramsden.

Photograph taken by Jonathan Lovekin for The Observer

Next Post: "Sunday Mornings: Coffee, Reflections and Music", to be published on Sunday 19th February at 10am (GMT)
Posted by A Cuban In London at 23:59