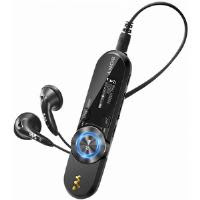 It died but it has yet to be buried. My former Phillips mp3 player stopped dead in its tracks (oh, dear, have I just come up with a superb musical pun? Methinks so) a fortnight ago and had to be replaced straight away. To be honest I still don't know what's wrong with it. The music folder disappeared mysteriously and with it the two-hundred-plus songs I'd put on it. I rushed to the nearest shop and bought a new one, but, it was utter rubbish. Please, take this piece of advice. If you ever come across the brand Archos, in whichever form, run a mile away from it. It's the worst make I've ever encountered. The shop compensated me and gave me a brand new, black 4GB Sony NWZB163 mp3 player. 4 giga is fine with me. It holds approximately between five-hundred and six-hundred tunes and it's perfect for when I'm on the move or out jogging.

The first time my wife and I heard Amy Winehouse was on Choice Fm. Straight away we were impressed by her vocal delivery and the lyrics. She had a beautiful Billy Hollidayish rasp, mixed with a more rooted, proper north London nasal twang. It's a pity that her booze'n'drugs lifestyle took its toll in the end. I'd rather remember her as she appeared on Jools Holland about the same time her debut album "Frank" came out. "Stronger than me" is a well-written pop song. I hope you enjoy it.

It's strange that this song is twenty-six years old and yet, it still sounds fresh. Suzanne Vega has such a distinctive timbre and in "Knight Moves" you can see why. She is one of the few singers who knows what to do with her voice. Beautiful.

Raw, dirty, blues-infused, no-holds-barred, nihilistic, take-no-prisoners. There are many more words I could use to describe the music of The Black Keys but if, like me, you're into real, heartfelt music and not the Justin Bieber drivel that gets put out by the corporate machine, then, watch the next clip, "Just Got To Be". Rocking.

In June, for Father's Day, I gave myself a present, or rather, several presents. I bought four CDs which had long been on my endless "Saved Items" queue on amazon.co.uk. Of the four, Anoushka Shankar and Karsh Kale's record "Breathing Under Water" is the one that gets played the most. And "PD7" is one of my favourite numbers. I hope it becomes yours, too. By the way, if you want to listen to another highlight from the album, the magnificent 'Little Glass Folk', click here. It's mesmerising, to say the least. The only reason I didn't include it is that the clip is just an image of the CD cover. I'm quite fussy when it comes to uploading videos on my blog. Have a nice week!