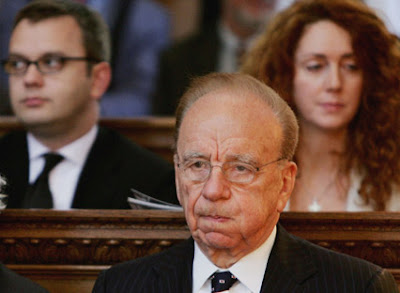 So, it was morality that did it in the end. We can put up with celebrities being dragged over hot coals, ex-reality TV "stars" being photographed whilst lying in the gutter (literally) or politicians being subjected to the kind of treatment that would have former members of the Stasi up in arms over the infringement of human rights. But when a newspaper interferes with a police investigation into the disappearance of a schoolgirl, our conscience steps in and declares that enough's enough.

It's been a strange fortnight here in GB. You can almost feel the smell of rotten apples wafting up your nostrils. First bad apple: The News of the World newspaper. Closed. Second bad apple: Rebekah Brooks, chief executive of News International. Sacked (or "resigned" as the official version has it). Third bad appple: the police. Two high-ranked officers stepped down, including the chief of the Metropolitan police. Fourth bad apple: Mr Rupert Murdoch. The powerful media mogul faced a panel of MPs last Tuesday 19th July. And had some shaving foam thrown at him. Not that men's toiletries will save the crop this year. This apple orchard is going down, down, down. The stench of it is enough to make you choke at the throat.

The phone-hacking scandal that has engulfed the UK press over the last two weeks has uncovered a whole world of deceit, bribery and corruption, elements usually found in banana republics. The collusion of politicians, media magnates, newspaper editors and the police in what is now acknowledged to be a serious fault in the wheels that keep British democracy rolling is mind-boggling.

Let's sum up, shall we? The crisis unravelled when it came to light that Milly Dowler, the schoolgirl who went missing in 2002, had had her mobile phone hacked. The News of the World paid a full-time investigator to intercept all her messages and at some point gained access to her voicemail. When the space for new messages ran out, the publication coldbloodedly deleted older ones, thus, giving the parents of an abducted teenage girl false hopes. They thought that it could only be their daughter who was getting rid of unnecessary messages.

Milly's case was followed quickly by allegations that the same newspaper had hacked into the voicemails of the relatives of the London 7/7 bombings as well as the telephones of next-of-kin of soldiers who had been killed in Iraq and Afghanistan. The waft from the rotten apples could not be disguised anymore. From British ex-prime minister Gordon Brown to family members of the victims of 9/11, the accusations that News International, the company that ran (the now defunct) The News of the World, functioned like an international drugs cartel, kept piling up.

At the heart of this crisis lie two questions: How free should the media be? And how do we deal with it when it goes beyond its remit, i.e., reporting and commenting on the news?

The answer to the first question is that the media and the press in particular should be as free as possible. A shackled media serves no purpose to anyone. The sheer variety of the British newspaper industry is what makes this country a beacon to other nations where journalism is regularly under threat and reporters beaten or murdered. Not that you would want to be caught doing much boasting about the British media these days. But crises do happen and to me, at least, it's not about having or not having them, but how you deal with them when they turn up on your doorstep.

So, how do you deal with the media when it starts thinking of itself as too important to be brought to heel? Regulation and education. No state regulation, mind, and no self-regulation either. But rather, independent regulation. It's unfortunate that the Press Complaints Commission (PCC) is such a toothless body that it never foresaw the kind of scandal that has swept the UK for the last fortnight. But that's the price you pay when you kowtow to the tabloid press.

Education enters the frame when you think of the type of "news" that the redtops churn out day in, day out, or Sunday in, Sunday out as it was when The News of the World was still alive. Tittle-tattle takes the space of serious debate about climate change, oil supplies, the overseas sweatshops that supply us with cheap goods, military intervention in other countries and other important items. The difference between the tabloids and the broadsheets is not that the former are low-brow and the latter high-brow (The Mirror is a redtop and yet its coverage of the invasion to Iraq was exemplary) but that publications like The Guardian (which has led most news stories about the phone-hacking scandal since the beginning) and The Independent are socially minded and not money-grabbing like their screaming counterparts.

Maybe legislation could be brought in order to balance the craven-for gossip with more mature commentary on political, social, economic and ecological issues. This would enable the public to know more about the pressing challenges facing our society today and the type of action our government ought to take. Perhaps the legislation could enforce the creation of trusts – in that case press moguls such as Rupert Murdoch wouldn't have such a stronghold on UK public opinion and politics. Above all, the new law would demand that newspapers owners be resident UK citizens.

Yet, despite the scandal and the crisis, I feel proud to live in Britain in these moments. Without Nick Davies's intervention (the The Guardian journalist who spearheaded the investigation into The News of the World's illegal activities) parliament would be retiring now for the summer whilst Mr Murdoch would be gearing up for his takeover of BSkyB, thus extending his media empire even more. Andy Coulson, the disgraced former editor of The News of the World and under whose management most of the phone-hacking took place, would still be at the helm of government as prime minister David Cameron's spin doctor. Rebekah Brooks, Ruper Murdoch's flame-haired right hand, would still be performing her Pollice Verso pantomime on her chosen victims.

The situation as it stands is not pretty. But, unlike it happened with the bankers' crisis and the MPs expenses scandals, the action taken has been immediate, the response from the public has been less apathetic (straight after the news about the interception of Milly Dowler's messages came out, conscientious Twitterers and Facebookers contacted companies advertising in The News of the World and asked them to stop trading with the disgraced publication immediately) and Murdoch has been challenged, probably for the first time in his life. So, some of the rotten apples have been taken out and the very ripe ones are already looking over their shoulder. That, to me, is one of the solutions to the whole powerful-media-magnate-runs-the-country scenario. If we're to make a good apple pie, or apple crumble, let's stick to the healthy, edible fruit. And chuck out the bad ones.

This is all from me for the time being. I will be spending a couple of weeks in beautiful Cornwall, a place I've never been to (the farthest I've gone west is Devon) but with which, I've been assured, I'll fall in love. In the meantime my blog will not be idle. Every Sunday there'll be music courtesy of my mp3 player. Unfortunately my old one died all of a sudden and had to be replaced. I'm happy with my new one, though. So, a new mp3 player with plenty of tunes for your enjoyment. I hope you have a nice summer holiday and will be in touch when I come back. Chao!