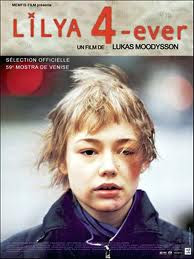 Whenever immigration is discussed in the UK, the following words and/or phrases are wheeled out: illegal, scroungers, taking our jobs, many, too many, no space, burden on the NHS/education sector. Less attention is paid to what makes some people up sticks and move to another country, sometimes travelling in a boat on dangerous waters, or in the back of a lorry.

That was one of the reasons why I welcomed Lukas Moodysson's film "Lilya 4-Ever". Because he dares to go where few directors will. Moodysson's feature packs a mighty punch. Like a scientist, he dissects the living, breathing (post-socialist) contemporary Russian society and reveals its bleak reality.

Lilya (Oksana Akinshina) is a vivacious sixteen-year-old girl who lives with her mother in a poverty-stricken, derelict Russian town. Her mother meets a man through a dating agency and together they decide to emigrate to the States. At the beginning, Lilya is pretty much part of her mother's long-term plans but soon that changes and she is left behind. The situation takes a turn for the worse when Lilya's auntie asks her to move to another flat which is in a worse condition than the one in which she lives now. Lilya befriends a local eleven-year-old boy, Volodya (Artyom Bogucharsky), who has a crush on her and together they get up to all kinds of pranks. About the same time, she also falls in with the wrong crowd and ends up meeting a smooth-talking young guy in a club, who promises her that he can take her away to Sweden where she will have the opportunities that are denied to her in her native Russia. What Lilya doesn't suspect, nor has she the ability to, is that her "boyfriend" is a pimp who procures prostitutes for a vast network of clients in European countries. He doesn't even travel to Sweden with her.

Once in the Scandinavian nation Lilya is locked up in a flat on her own where she has to perform all kinds of unspeakably sexual acts. And it is here, in civilised, liberal Sweden where she meets her horrible fate.

Lilya 4-Ever is, above all, a film about betrayal. Lilya's mother betrays her daughter. Lilya, then, betrays Volodya when she meets Andrei (the pimp) and leaves her friend behind in an attempt to improve her life in Sweden. Lilya is consequently betrayed by Andrei, too. At the same time all characters in the movie are let down by society, both the Russian and Swedish, for their role in it amounts to no more than a mere cameo.

But the movie is also about the failure of the "big Soviet dream". One should never build a polity on utopias. One of the reasons why the socialist panacea failed - and continues to fail, in the few countries that are left - was that it created an illusion it couldn't deliver. The effect of this mirage was alienation amongst its younger members with the concomitant outcomes: drugs, alcohol and prostitution. For Lilya, read the youngsters jumping over the Berlin Wall in '89, or the Cuban rafters in '94, or the lone man facing the Chinese tanks in Tiananmen Square. The squalor in which Lilya lives is not just the result of deficient post-Soviet economic policies, but also of erstwhile blind, centralised, political bureaucracy.

I admit that I rented the movie from Lovefilm without having an inkling about the director's work. It turns out that his two previous films have been comedies. Talk about career change!

There's no doubt that Lily-4-Ever is a tough movie to watch. But it is also riveting. It's cinematography at its best. The music is very good, ranging from hardcore metal to soft, harmonious melodies. The scenes where Lilya is repeatedly raped by different men are shot from her perspective, thus rendering her ordeal more palpable. The dreamlike sequence where Volodya's spirit appears to Lilya would have been thought kitsch in any other context. But coming on the back of yet more physical and mental pain for the protagonist, they are beautiful to watch. As well as painful. The photography reminded me a little of Ken Loach with its no-holds-barred documentary-like approach.

This is another must-see movie. And I, for one, will be now looking up Moodysson's comedies on Lovefilm. Just to balance a bit, you know.

Next Post: “Sunday Mornings: Coffee, Reflections and Music”, to be published on Sunday 24th July at 10am (GMT)