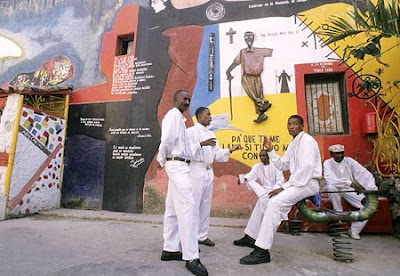 As I mentioned a couple of weeks ago I will be posting some of the columns I used to write for the now defunct newspaper 'Noticias', a monthly publication that catered mainly to the Spanish-speaking community in London. Chronologically speaking, today's article was the very first one I wrote. The inspiration for it came from a conversation I had with an old acquaintance of mine from my uni days shortly before I came to live in the UK. He and I had became dominoes partners during the years we were both higher education students, though we belonged to different faculties. We ran frequently into each other at the Havana University Students' Club and never missed a chance to sit down to a game of dominoes. And wipe the floor with our opponents' backsides. We were good. Correction. We were crackingly excellent. If our degrees had been in dominoes as opposed to biology in my acquaintance's case and languages in mine, we would have both, by now, achieved our PhDs.

However, after all those years of seeing each other almost every day, one day R (though I haven't seen him for close to fifteen years, I'll use only the initial of his name out of respect), disappeared. He never came to the Students' Club anymore and when I enquired after him to people we both knew they had no answer either. It was starting to look as if he'd also been part of the group of youngsters who'd left Cuba in the immediate aftermath of the balseros crisis of '94.

One day, all of a sudden he turned up at the club whilst I was having rehearsals with the Havana University Folkloric Ensemble. Physically speaking, he was still the same, but the look in his eyes was different. There was an emptiness in them as if someone had gouged the life from them and left the eyeballs intact. It was when he began to talk that it hit me. He said that he'd found the true path and that for those who, like me, had chosen the devil's way, the only option available was hell. He'd become a Christian, and not just any Christian, but a proselytising, hardcore one. R was black, like me. It occurred to me then and the same idea crossed my mind when I sat down to write the article below that he was rejecting his polytheistic African roots (and you don't have to be a non-believer to accept this cultural fact) for a monotheistic system imposed by the coloniser. It was ironic that our forebears had been whipped to within an inch of their lives and here he was now, extolling the virtues of the very God in whose name we were deemed less than animals.

I don't usually make my race a big deal, either here on my blog or in my normal, offline life. After all my skin colour is as much as result of genetics as it is an accident in and of itself. I could have been of a lighter or darker tone. But, what I look to the most above all is to be treated as a human being, first and foremost; that remains my main identiy. R was impinging on that identity. But also, in doing so, he was reneging on one of his identity markers, namely, his African ancestry. Unbeknownst to him (not that he would have cared anyway), my career as an Afro-Cuban performer was not just out of love for the dance but also respect for and desire to learn about the culture.

That's, then, how this column came about. Of course, R's name is not mentioned once and why should it? After all this short write-up was done mainly to honour those who left their sweat, blood and tears behind, in the sugar cane fields and in the mills and yet still managed to bequeath one of the richest cultural heritages ever to my fellow countrymen and women. R's loss was my gain.

My thanks, once again, to Lise McDermot Jones who translated the text into English. The Spanish original appears first and the English version below. The music today is related to the topic. It is a song by Sintesis, one of the first Cuban bands that mixed Afro-Cuban folklore and pop music. I hope you enjoy it.

"I am a descendant of that place, where black people soothed their pain with the rhythm of the drums..."
Clave y Guaguancó

Every time I hear the sound of that rumba, my black, Cuban blood freezes. The thought that the main art of my folklore has its roots in the most ignominious, shameful and degrading trade that has existed in the history of humanity is enough to make the eyes of the world cry with rage.

Between 1666 and 1776 the English, French and Spanish were the main importers of slaves to their colonies in Latin Ameria, a trade which reached a figure of three million. A quarter of these died during the voyage.

In Cuba, the imported culture which was most influential in what would later become Afrocuban folklore came from the Yoruba people. Yoruba was the term identifying certain tribes that spoke the same language although they were not united or politically centralised. Their level of urban and artistic development was amongst the highest in tropical Africa. They had a pantheon of gods whom they called "orishas", each with their own characteristics and attributes. These constitute pure, intangible force which cannot be perceived by human beings, but rather "takes possession" of chosen people, called "iyawó".

At the end of the 18th century "santería" emerged, which was the syncretisation of the various Yoruba cultures and the Catholic religion in a logical and natural process, so that each orisha has an equvalent in a Catholic saint. Following this the Regla of Ocha was born, product of the union of Latuan, a black Yoruba woman and a black "babalosha", or priest, Lorenzo Sama. At the end of the 19th century Eugenio Gutiérrez established the Regla de Ifá, sacred order of "babalawos" or priests.

In spite of having always counted on many followers (both openly and in secret), African culture and religion in general have not had the same fortune as those brought from Europe. This has largely been owing to the image that African culture has always had in Cuba as inferior, primitive and unsophisticated. Nevertheless, a significant number of Cuban believers are followers of an African (or "profane", as they are also called) cult, or even practise this alongside Catholicism, a case in point being those who make the sign of the cross and say "My God!" but finish by brushing off their arms and torso as a sign of "cleansing", exclaiming "Siákara!" (an African blessing).

It is then that you realise that in spite of the mistreatment, of the long hours of work and the beatings suffered by the slaves, this culture is felt more than ever today. And this is reflected in a popular and very Cuban expression pointing out that everyone there has blood from one or other African tribe: "Here, whoever isn't part Congolese is part Carabali)