The Secret in Their Eyes (Review) 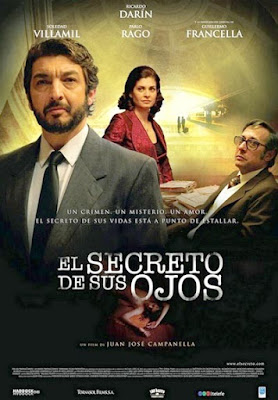 "You said life". It's not very often that such a short sentence, like tonight's post's opener, is loaded with so much meaning. But it would be fair to say that this laconic statement is the axis on which the plot of the Oscar-winning Argentinian thriller "El Secreto de sus Ojos" ("The Secret in Their Eyes") revolves. The 'life' to which that phrase refers can be interpreted in two ways.

The first one is pretty direct. It's the movie's main narrative. In mid 70s, pre-junta, Argentina, an attractive schoolteacher is raped and murdered. The resulting investigation sees young policeman Benjamín Espósito (Ricardo Darín) working with - and falling for - Cornell-graduate lawyer Irene Menéndez Hastings (Soledad Villamil). After a false start following a confession beaten out of two immigrants by one of Benjamín's rivals, the real killer is finally apprehended. He turns out to be a long-time acquaintance of the victim's and obsessed with her. But corruption is rife and the perpetrator is soon freed. Thus, justice is far from done. This situation, which takes up to thirds of the movie, is important to understand the meaning of the opening phrase of this post. A phrase, which is the last line in the film, uttered by the deceased woman's husband to a puzzled - but understanding - Benjamín.

The second reading is more subtle and concerns three characters. One is the aforementioned widower, who, on figuring out the identity of his wife's killer, goes regularly to the same train station, week after week, hoping to come face to face with the criminal. This stakeout becomes his only life, since his beloved one's has been taken. The other two characters for whom 'life' means exactly that are the two leads. Twenty-five years after the murder and whilst writing a novel about it, Benjamín pays a visit to his old boss. He realises immediately that his feelings for her have not abated, but, on the contrary, intensified. The way they look at and desire each other reminded me somehow of the end of "Love in the Time of Cholera" when Florentino Ariza tells Fermina Daza that "after 53 years, seven months and 11 days and night, my heart was at last fulfilled. And I discovered, to my joy, that it is life and not death that has no limits." In Benjamín and Irene's case it's, fortunately, only half that time.

There are other elements that make "The Secret in their Eyes" an excellent film. The supporting cast, headed formidably by Guillermo Francella (Benjamín's alcoholic sidekick), with Pablo Rago as the grieving husband and Javier Godino as the psychopathic killer, is exquisite to watch. The photography is superb, especially the interior shots and the flashbacks. There's plenty of humour, too, which is very welcome in a film laden with so much suffering.

But to me it's the Dostoevskian puzzle at the centre of the film that matters most. Should life mean life? And, should we use violence to retaliate when we've been wronged and justice has not been done? I think that each case should be treated individually, but in Juan José Campanella's film I find myself replying affirmatively to the opening sentence of this review: yes, life means life.

Next Post: “Sunday Mornings: Coffee, Reflections and Music”, to be published on Sunday 10th July at 10am (GMT)

Labels: A Cuban In London, Cubans in London, El Secreto de sus Ojos, movies, The Secret in their Eyes