Dawn
“Is he asleep?”

Of course, she snaps. But should there be an 'of course'? After all, many a night she has been up until the small hours consoling him after a fit. It's not the convulsions she fears, to those she has grown accustomed, it's the aftermath, his sense of disorientation. Her voice softens. "Yes, he is asleep, sorry".

Silence. The unsayable is usually followed by quietness. This is not what she came here for, however. She saw the balcony light on, knew he was out there, wanted to have a chat. Wanted to have contact. With another human being. Wanted. To see him.

Their eyes kiss. It's a lingering, embracing kiss, the type they know they won't be able to replicate with their lips.

"How bad is he?" He sounds worried, but maybe he just wants to break the uncomfortable silence. There are good days and bad days, she replies, lately we've had a good run. But you can never be certain. He will die very soon. Of that we're all sure, the kids and I. The tumour is too advanced. Hence the holidays. Radiotherapy, chemotherapy, oncologist, surgeon. A whole new vocabulary she never asked to be taught. The surrounding Andalusian landscape reminds her the time when she wanted to learn Arabic. Who knows, maybe by now she would have been able to say brain tumour in that language.

He looks at her. From where he is sitting, leaning back on his chair, feet up against the door frame, he can just make out her naked body underneath her camisole. The full moon serves as a giant spotlight that outlines her fine features: her wrinkled face, each crease telling a unique story of an eventful life, her strong shoulders, the result of many a lap in her local swimming pool - wait, didn't she dare him to a race a few days ago? And beat him? He looks at her curly black hair, set against the paleness of her skin. White streaks already crowd her mane. Often, she jokes, she imagines a short dialogue between a -still- black strand of hair and its grey counterpart: "Will you ever dye?", "I don't know about you, but my owner and I will surely die one day". He looks at her breasts, already pointing downwards, as if they were trying to reach down to its belly, rounded, protruding belly, the carrier of three beautiful children. Children? No, teenagers now. His eyes keep travelling southwards to her legs. Her negligee is ankle-length, but still he is able to see her well-shaped, veiny legs, her strong thighs. Even the incipient cellulite sits well on her body.

He catches her catching him looking at her. He feels embarrassed but doesn't blush. His dark skin won't let him.

"It's OK. It doesn't hurt to look". She smiles. She wants to add, I like the way you look at me. It makes me feel desired. But she doesn't dare to utter the words. His wife might hear her.

"Is your wife asleep, too?"

He nods. She had a headache, he says. As usual, he thinks. His eyes focus on the whitewashed Spanish village, near their cortijo. He remembers the walk they took two days ago, around the town's tree-filled square and cobbled streets. Her husband was really looking forward to it. He was in high spirits, there had been a gap in his verbal glitches, maybe the treatment was working after all. He kept talking the whole time, word after word, stringing sentences together, emphasising each points with his hands. Funny that, he doesn't remember her husband gesticulating as much before... Is that what happens when you get a brain tumour that affects your speech? Do you start talking with your limbs? He remembers the walk well. Yes, he does. He also remembers his wife. Holding hands with her at first like two adolescents in love, until they began to argue. Inevitably. It was over some petty issue. As it's the norm these days. And then the hands went their own separate ways, like their owners. When did their relationship stop working? Sometimes his current situation reminds him of a driver leaving the windshield wipers on when the rain ends. The squealing, dry sound that diverts the driver's attention from the traffic for a split second. That's how his relationship feels at the moment. But he can't bring himself to halt the wipers.

"Things are not going very well, are they?", her voice is calm and low but there's no mistake that there's some hope in her question.

"No, you could say that a tumour is also killing my relationship".
"I think you're wrong. I fell out of love with him before he was diagnosed. His condition has just made things... more difficult"
"You mean, to leave him?"
"Yes. Who would like to be tarred with the 'cruel wife' label?"
"Then, there's no hope for me? For us?"

He's never gone this far before. He realises now that their conversation up to this moment has been mere background music for their feelings.

What does happen is that they both stay where they are, her sitting now on the marbled floor, him still leaning against the door frame on his chair. Immobile. But their mouths do not remain motionless. There are words pouring forth at great velocity, many words, trying to make sense of the lack of a plan B. He married for life, but can’t help seeing his relationship fading out. He doesn’t blame his wife; he is just as guilty as she is. But it’s painful to bear witness to your own life heading for a car-crash scenario, in slow motion. There are the two kids to consider. Kids, he thinks, yes, university kids. Spongers, he calls them sometimes. He laughs. And then, there’s you. He comes clear. It’s been building up slowly, but surely. She nods. He continues, it was your humour, our conversations, your maturity, your confidence. Nothing to do with my body, then, she replies. Oh no, it's not that, he laughs. An embarrassed person's laugh. He didn’t mean that, he says. I know, she responds, like a mother who’s just caught her teenage son hiding a top-shelf magazine under his bed. It’s her turn now. I loved and then un-loved, she says. He was, is (do we start talking in the past about our partners only when we are thinking of cheating on them, she thinks), wonderful. He always supported me in my teaching career, despite, or on top of, rather, his own successful literary one. Always on hand to take care of the kids whenever I was marking or staying behind, volunteering for the school fête. But there was no romance. I can’t remember who killed it first, but I was ready to leave when… Would you have left him for me? He asks, anxiously. Would you have left your wife for me? She retorts.

His silence is seized by her to press on, unchallenged. I, too, fell for you many years ago. Same reasons you gave, plus your body, she smiles. I always saw you as more than a friend. Whenever you discussed your difficult upbringing and how you fought your way through, to be who and where you are today; I felt an intimacy developing between us.

Suddenly she changes the subject. She is at her wits' end, she admits. Recently she wrote to the Guardian’s Family Supplement’s ‘A letter to…’. She addressed her missive to her husband’s illness, she says. "Dear Mr Tumour", she began her correspondence, "I think that it's hightime you stopped showing your displeasure at my husband's writing. It is true that he has just killed the protagonist of many of his books, Dr Spürhund. As a crime writer that could be considered suicidal, but that was a decision made by his agent and publisher. Nothing to do with my husband. It was to do with sales, with new media, e-books, marketing. That's no reason, Mr Tumour, for you to fog his brain, to blur his speech, to rid him of his language, because language is what he trades in. Would you deprive a sculptor of his arms? My husband used to sculpt beautiful sentences, extraordinary passages, crafted carefully after many hours locked in his room." The letter continued in the same tragicomic vein, "Do you know that he says that because 'tumour' rhymes with 'humour' he can now swear as much as he likes? And he immediately corroborates this finding by saying 'poppycock' repeteadly, lowering his voice when pronouncing the first two syllables. Who knows, maybe his last word before he dies will be 'cock'..."

He is crying. In silence. Strangled sobs that punctuate her narration. Dawn breaks. The nascent sun spreads its orange carpet over the Alpujarras mountains. This was once the dominion of Aben Humeya, the last Moorish king of Al-Andalus. Today is the realm of repressed sentiments. Her eyes are bloodshot. Although, if it is a consequence of the dry air, lack of sleep, or absence of love, nobody knows. 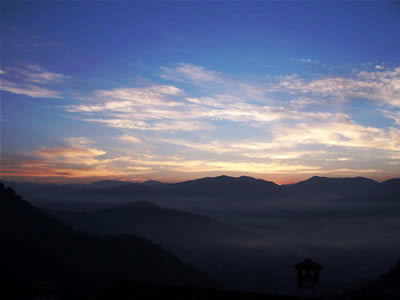 Next Post: 'Sunday Mornings: Coffee, Linguistic Reflections and Music', to be published on Sunday 28th November at 10am (GMT)
Image taken from Our new life in Andalucia Spain Big Blog
Posted by A Cuban In London at 10:00

Labels: A Cuban In London, Cubans in London, Exercises on Free Writing