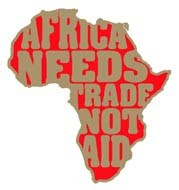 "I still think that if we give more money to poor countries, they will solve their problems". Call him stubborn and he can be sometimes, but my son was arguing his point fair and square. We had just finished our lunch and were going through the pieces of homework he had completed and the ones he had yet to. The above point was made whilst discussing his Geography assignment for which his teacher had asked him to research the charity, aid and trade side of the relationship between developed and developing nations.

Upon hearing my son's comment, my wife felt disheartened, my daughter remained undisturbed whilst my emotions ranged from optimism to despondency.

The reason why my consort felt dismayed was because she was under the impression that my son was clever enough to realise that aid without a mid- and long-term plan would be fruitless and possibly detrimental for a developing country. We've had several discussions at home in the past about the role charity plays in the economic relationship between rich and poor countries. But I think that it's tough for a twelve-year-old to know when to identify colonial legacy as an influential factor and when to focus on bad governance - domestically speaking - as another element to include in the equation.

Prior to the general election in May this year, the three main parties pledged to support the UN's target of spending 0.7% of gross national income on aid by 2013. However the real story was that trade did not feature as highly in each party's manifesto as it should have done. The Tories were the ones that came closest to a tangible idea with some ambiguous, nice-sounding message about "trade and economic growth are the only sustainable way for developing countries to escape poverty". Both Labour and the Liberal Democrats just beat around the bush.

The whole "trade not aid" or "trade vs aid" issue is a murky one. For starters, I think that there's a charitable side to all human beings regardless of our provenance, or what we do. That we're able to empathise with those who are worse off than us is one of the human traits that still fuels my optimism. But sometimes we need to put our pragmatic glasses on and look beyond the rim. Where does aid really go? Who benefits from it? What are the long-term effects?

Apologies if I have already used this example before, but it's a standard one. If you carry a child on your shoulders everywhere you go from babyhood to adulthood, that child will never learn how to walk. Furthermore, at some point the child will be conscious enough to want to walk him/herself only to find themselves falling down at each step they take.

It's a similar case with aid. Countries that have long been dominated by powerful nations, or which have seen their economies suffer through sanctions or corruption are in a weak position when democracy is ushered in. Whilst some kind of stimulus package - to use a phrase de nos jours - is probably very welcome, at some point that country needs to, no, sorry, correction, must begin to fend for itself. Where we could do something to help is in clearing the path towards that nation's self-recovery and ultimately self-sufficiency. For instance, we should raise our voices in unison at the unfair way in which European farmers are subsidised by the state and the European Union, thus allowing them to sell their goods in Africa, Asia and America at lower prices. The outcome of this injust trade-off is that local industries can't compete and eventually they have to close or specialise in enterprises that will mainly suit the big corporations. No amount of aid will solve that, but pressure on parliament and government is one of the ways forward.

There's also another side of the coin with which to contend. It revolves chiefly around the fact that aid has been used on many occasions to bring a rogue political figure to power. Or it has been used to prolong and fund civil wars unnecessarily. There are examples aplenty: the Congo, Sudan, Iraq under Saddam Hussein. Another consequence is that in the same way we empathise with the plight of poorer countries, we put our blinkers on when it gets too much. I've heard many well-meaning people who give to charity and do voluntary work ask me: "Well, they've had time to sort themselves out, haven't they, so, why can't they get it right once and for all?". My answer varies depending on the person. Sometimes I go back to the reason at the beginning of this paragraph. Aid gets sidetracked by whatever dictator is in power and the beneficiaries are an elite who doesn't care about those on the lower rungs of the ladder. Or, I try to explain that it's quite hard for countries that have been dependent for so long, to find their feet in a few decades. But they, and I, too, can sense that the mood is changing. There's an economic recession going on and as of the 20th October in the UK, at least, we'll have a full breakdown of where the budgets cuts will fall. No one is safe, and when a person's job security is threatened, paranoia sets in. It follows that questions about the commitment to aid I discussed at the beginning of this post will be asked.

During that lunch both my wife and I asked my son, who had just had his grandmother (my mum) visit him from Cuba, if it was fair that her grandma couldn't come and go as and when it pleased her. We asked him which option was better: her grandmother earning enough money to pay for her own trip and expenses, or her continuing to be invited over by her son and his family without having the financial ability to even treat her relatives to a meal in a restaurant? To our relief he chose the former, but he was still adamant that aid was fundamental.

Maybe in time he will change his mind. I hope so. I am of the opinion that as well-intentioned as many people are, money or donations by themselves will not lift countries out of poverty. Good governance does, though. Fair trade where the beneficiary is the local community does, too. Above all, I would like my son to see people from developing nations as human beings who want to work and who would like to see the product from that endeavour turned into better living conditions. A bugbear of mine for many years has been the photo of the pot-bellied African/Asian/Amerindian child that comes with my weekend papers. It was effective for some time, but once you meet people from those continents - and I hail from that neck of the woods myself - what strikes you at first is that there's rarely a sign of self-pity. And there's plenty of evidence around of what happens when they use the power that is denied to them by both the big corporations and the Bono brigade (there's a famous story about the U2 lead singer, maybe apocryphal, that at a live concert he silenced the audience and said: "Everytime I clap my hands a child in Africa dies", to which an audience member snappily retorted: "Stop f*****g clapping then!").

But there's a factor that shouldn't be underestimated. A twelve-year old who takes time from thinking about getting a snake or wishing for a Wii (yeah, right, dream on, son!) to stop to muse on those less fortunate than him deserves to be commended. At an age when some of his peers are already using immigrants and aslyum seekers (sometimes in the same sentence without trying to understand the differences between the two groups) as scapegoats for all society's ills, the fact that he thinks that charity is the start- and end-point of economic development for poorer nations should be the least of my wife's and mine worries.

Next Post: 'Killer Opening Songs', to be published on Tuesday 12th October at 11:59pm (GMT)