Living in a Bilingual World (The One About Uncle Tom) 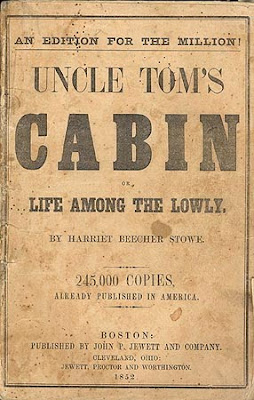 I guess it's now time for the defense to have its turn in the case of Uncle Tom vs Famous Epithets That Might Be a Tad Bit Unfair. I am, of course, referring to the eponymous character of Harriet Beecher Stowe's novel "Uncle Tom's Cabin" and how over the years he has become a byword for obsequiousness and servility. In short, a sell-out.

I first came upon this term when I was still in university. It was a period during which I began to read so-called "black literature", mainly African-American authors (Walker, Morrison, Hughes). In addition to enriching my vocabulary in English, this type of reading gave me a cultural context that enabled me to understand many of the references to which I had been exposed until then, like for example in music.

I had to wait several years before I laid my hands on the book. However the first time I read it I remember having an uneasy and funny feeling, as if something wasn't quite right. It's taken me a second reading to realise that it's the use of "Uncle Tom" as a pejorative word that makes me squirm.

This is a complex situation. On the one hand I feel deep respect for the English language, for the people who speak it and for the authors who write in it, regardless of their country of origin. On the other hand, I just don't feel the use of "Uncle Tom" as a term of abuse. I felt awkward the first time I heard it and this second reading of the novel has convinced me that in fact Tom is a hero, if maybe not as prominent as George, the runaway slave, who flees to Canada with his wife Eliza and their child.

To explain further my sentiments, I'll share an anecdote with you. One day, many years ago, a black former colleague of mine, from Nigeria, said jocosely: Yo, (insert my name), man, my Cuban n****r! I immediately replied: Don't ever use that word when addressing me again, thanks. I kept calm, I didn't even raise my voice, but he knew he had vexed me. Dealing with the "n" word was easy (regardless of all the arguments and counterarguments made by the Reclaim Brigade over the years). However, dealing with the "Uncle Tom" concept is a totally different situation.

It is true that Tom is servile and obedient. It's also veritable that when faced with the opportunity to escape, he doesn't seize it. He is passive, way too passive and I can imagine how his docility might have played out against the backdrop of the civil rights movements in the 50s and 60s. But, let's dig deeper, shall we?

If you've read the book, you will probably remember the chapter where Tom is on a ship with Haley, a trader and Lucy, a female slave Haley buys en route to the south. Lucy's child is stolen, sold and taken away from her whilst the boat is docking in Louisville and she is leaning over the rail to see if her husband is amongst the crowd gathered at the wharf. Haley breaks the news to her calmly and coldly. Lucy doesn't cry, she doesn't make a scene. At night and whilst Tom is half-asleep, Lucy jumps off the ship to a certain death. Or maybe freedom, we don't know. But what we do know is that Tom doesn't wake Haley up and, when questioned the next morning on Lucy's disappearance, he just replies: "Well, Mas'r, towards morning something brushed by me, and I kinder half woke; and then I hearn a great splash, and then I clare woke up, and the gal was gone. That's all I know on 't." Tom could have thwarted Lucys plans by alerting Haley, but he doesn't do it. He just prays for Lucy's soul.

It's the same with Eliza's escape. When Mr Shelby, Tom's owner, sells some of his slaves to pay off his debts, Eliza takes his young child (who is to be sold to Haley) and escapes. Tom, on the other hand, doesn't. Cowardice? Hmm... no. I believe that what motivates Tom to stay behind is loyalty to all the other slaves because if he also elopes, Shelby will have "to break up the place and sell all."

There's another reason why I find the phrase "Uncle Tom" unfair. Tom is a product of a society whose foundation lay on Christian values. Both South and North used the Bible to pursue and justify their goals, even if sometimes they were marginally different (the conversation between St Clare and his cousin Ophelia in Volume II, Chapter XIX, throws up some very interesting issues). Tom, to put it bluntly, is drenched in religious doctrine. He is so brainwashed that he can no longer think for himself. When asked to explain his predicament, he can only talk in scriptural language. To use someone as naïve as he is as a whipping figure for all the wrongs visited on black people in the States and beyond is, in my humble, non-native opinion, misleading. A better example of selling-out would be St Clare's servants: Mr Adolph, Rosa and Jane. They look down on the rest of the slaves in the house, oocasionally using and abusing the "n" word when addressing them. They adopt the same language, airs and graces of their white masters. Unfortunately calling someone a "Mr Adolph" or a "Maid Rosa" doesn't sound as forceful as Uncle Tom.

As I mentioned before, self-censorship is not this column's central message. People have the right to say whatever they want in whichever way they see fit, as long as they don't use demeaning language. However, in Uncle Tom's case, and especially if you've read the novel, the defense has not closed its argument down yet.

Next Post: "Sunday Mornings: Coffee, Reflections and Music", to be published on sunday 24th October at 10am (GMT)
Posted by A Cuban In London at 23:59