Killer Opening Songs - (So What by Miles Davis) 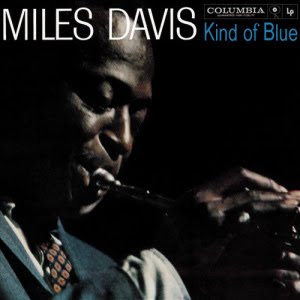 There are some records that cross the borders of musical polarisation. Sometimes they do so by fusing different rhythms, thus appealing to various tastes. Examples exist aplenty: Sergio Mendes and Brasil '66's debut album "Herb Alpert Presents" gave us the ultimate jazz-infused bossa nova Killer Opening Song, "Mas Que Nada"; The Beatles re-invented pop music by dint of being adventurous and experimental, especially in the latter part of their career; and more recently Nitin Sawhney has shown us the way in which globalisation, at least in music, can be beneficial.

However, there are also other albums that gain plaudits without abandoning the genre to which they belong. And this is the case with "Kind of Blue", Miles Davis' 1959 masterpiece. Long hailed as the jazz record that even non-jazz fans enjoy (a notion of which Mr Davis might have slightly disaproved), this LP transformed music itself. It is indicative of "Kind of Blue"'s creative range and reach that amongst its contributors was the young saxophonist John Coltrane, who had already found fame himself with the release of "Blue Train" a couple of years before. The other saxophonist in the record was Cannonball Adderley.

Above all, "Kind of Blue" became Davis's a turning point in his musical career in that he went from a bebop sound, predominant at the time, to a more experimental and improvisational one. The Killer Opening Song, "So What" bears witness to that change.

Smoky, laid-back and blues-influenced, "So What" begins with bass and piano duetting in free rhythmic style. This is quickly followed by Davis on trumpet and John Coltrane on sax. What K.O.S. loves about this track is how the piano whispers its way into the song (sadly not shown in the clip below); it's almost like a murmur so as to announce that hey, this is the real McCoy, fellas.

"So What" is followed by a collection of songs so impressively sophisticated that it shouldn't come as a surprise that fifty-one years later after "Kind of Blue" first came out, they still sound fresh: "Freddie Freeloader", rhythmic simplicity at its best; "Blue In Green", an acoustic feast with the trumpet and piano solos as the main course; "All Blues", one of the better-known compositions from the album for its melodic and groovy range and "Flamenco Sketches", the song that apparently Quincy Jones claims to play everyday .

According to pianist Billy Evans, who played on all tracks but one ("Freddie Freeloader") in the record, Miles only conceived the settings for the different pieces hours before going into the recording studio, which is why spontaneity pours forth on every track.

Whilst trailblazers like Charlie Parker broke away from the rigid structure that used to permeate jazz, pioneering bebop in the process, and innovators like Ornette Coleman brought a nihilistic element into the genre, musicians like Miles Davis provided a new colour to what was already a rich palette in the jazz world. Here's to Miles and to another Killer Opening Song.

N.B.: This post is dedicated to Daniel, the Cuban in Brazil, who recently e-mailed me to tell me that I haven't featured much jazz in my K.O.S. section. You're right, Daniel, and this is the first of many posts I will be writing about a music genre I adore.

Labels: A Cuban In London, Cubans in London, Jazz, Kind of Blue, Miles Davies, music, So What