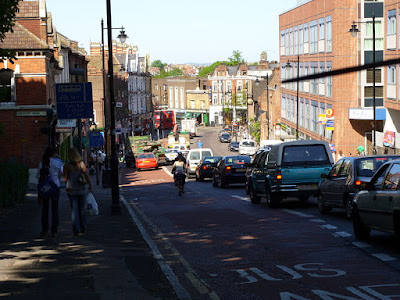 Disclaimer: This post is not an endorsement of bad driving and the blogger cannot be held responsible for any actions resulting from reading this post. Also, the following should NOT be attempted under any circumstances whilst doing your driving test. You will fail!

A few months ago I was driving around the leafy suburbs of Muswell Hill and Crouch End where the landscape varies dramatically from one road to the other, especially in the former case. Sometimes it is flat, sometimes it is slopy. On approaching a mini round-about half-way up a hill I looked to my right and noticed that a few cars were coming down the street. As it is customary in these cases, I brought the car to a halt softly, put my handbrake on and the gear into neutral. That did not last long, though, as I revved the car slowly until the needle went up to 2 and brought the clutch back up delicately whilst at the same time releasing the hand-brake. The vehicle remained motionless for a few seconds and as soon as the traffic cleared from my right I was ready to go.

This course of action is not a lesson you are taught when you are learning how to drive by your instructor. He/She would deem it unwise and unsafe. In fact, it was actually my wife who first suggested it as a way to be prepared to continue my journey without delaying the traffic behind or stalling the car. It got me thinking, though. Some songs are like that. A journey through a musical spectrum where suddenly they go uphill and come to a round-about similar to the one I encountered on that occasion and then they stop. Momentarily, however. Just for a few seconds. Far from putting their hand-brake up, though, they dither a bit and let the car gears reach the biting point. It is normally no more than a few seconds, until the green man changes to red, until the last car on their right hand-side has passed. And then the journey continues.

To illustrate this I have gathered a selection of clips from youtube.com as usual. My first offering comes courtesy of one of the most prolific and influential musicians Cuba has ever produced. He has already been featured on this blog in my 'Autumn Songs' selection and at the time the feedback was very warm and effusive. So, I thought it was apposite to bring him back. Ernesto Lecuona, El Maestro. By the way, at 2:46, watch the pianist's right hand as it glides over the piano ready to come down softly on the black and white keys in order to continue the journey after the uphill start. Think of the biting point. Sublime!

One of the most common mistakes people make when they choose not to put their handbrake up whilst doing an uphill start is that their car rolls backwards. This is a very serious error which could cause an accident (read the disclaimer at the beginning of this post). To avoid this, as you go up a slope and are coming closer to either a round-about or a set of traffic lights you should stop slowly and ease back into first gear the same way Caetano Veloso does it in this live rendition of 'Girl from Ipanema', the eponymous composition by Joao Gilberto. At 1:02 look how Caetano joins in without interrupting the musical flow. Brilliant.

He was extravagant and eccentric in the 70s. But what you can never deny is that his musical output was second to none. And in the same way a car manoeuvre like the one I have been referring to so far can seem odd, his choices were sometimes criticised or just derided. But where would pop music be without David Robert Jones aka David Bowie? Classic.

It's Roger on percussion that really does it for me on this track. The way he bangs on those conga drums so ominously, keeping the beat going, weaving bass, guitar and vocal into one thread is a joy to see. But what also kills me (pun unintended) is watching Freddie shortly before his untimely death. His voice singing to the inevitable. That split second before the cars coming on your right pass in front of your eyes and continue their journey is the same split second in which your whole life is shown to you as a slide show before you are gone. Masterful.

Uphill starts are unpredictable and certain bands music is, too. Uphill starts where clutch is slightly raised whilst the right foot is firmly glued to the gas pedal keeping the needle in number 2 and the handbrake stays down have chutzpah. The same goes for some bands. The same goes for this band. They had a carefree joie de vivre, a raw energy that consumed the listener. Recently they staged a comeback at the O2 arena in London and their insouciance was still there for everyone to see. Watch the way guitar and voice enter a playful battlefield where little skirmishes here and there build up the momentum in this famous track. Led Zeppelin never did things half-way and you, too, should be prepared to take your chances when it comes to heading up that hill and braking slowly just before that big road ahead of you. Just enjoy that tiny instant when all the gears in your car are huffing and puffing to provide you with the magic of the 'biting point' moment. Amazing.

This is all for this week. Happy driving!