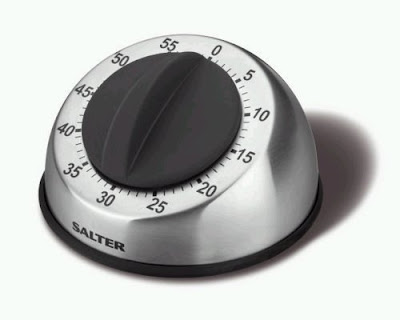 'Right! Five minutes for both of you to leave your bedrooms tidied up!' Two pairs of eyes gazed at me astonishedly. 'Don't look at me like that, your rooms are not that messy, so five minutes should be enough.

Son went off to get the job done straight away, yet, Daughter hesitated a little bit and with a pleading voice said: 'Five minutes are not enough, Papi! You know that!'. 'Well, if you keep talking and standing there without getting on with it, of course you won't have time to get it all done! I'm going to put this timer on and in five minutes I'll be back upstairs to check that everything is organised.

In between doing the washing up and listening to Astor Piazzolla's superb live recording 'Libertango' I lost track of the time. However, I was sure that the five minutes that I had allocated to the children had already elapsed. I checked the microwave clock and it was almost 7.10pm, therefore they had been engaged in the tidying-up chore for almost twice the time I gave them. Yet, I was sure the timer had not gone off. I mounted up the stairs silently and on entering Daughter's bedroom she jumped up as if she'd just seen a ghost. 'Time's up'. 'No, it's not', came her reply, 'the timer's not gone off yet.' I strode to the bathroom and there were still a couple of minutes left. I went back to Daughter's room, but this time with an inkling as to what had happened.

And as I descended the stairs I could still hear her talking to herself: 'minutes, no, minutos, horas, días...'