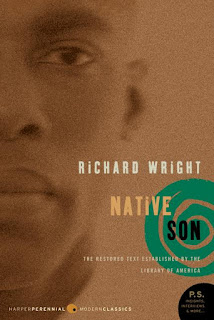 It’s been a long time since a book has scarred me as much as Native Son. Last time this happened it was James Baldwin’s Another Country the culprit. With its myriad characters and black and white setting, literally, NS has created a dichotomy in my brain. On the one hand I can understand the main character’s psyche. I can even sympathise with him most of the time. Bigger is a product of white American society and its flaws. Bigger is what the US could have prevented from happening when the Civil War wrapped up. But then, race has always been a powerful tool in the hands of the ruling elite and nowhere is this more obvious than in the opening passages of NS. Sometimes I even find parallels between Bigger’s ordeal and that of the main character of Ralph Ellison’s Invisible Man, another major work of literature that I’ve gone back to over and over. The problem is that Bigger is the flipside of Ralph Ellison’s coin and it’s not due just to his sheer size, but also to his overwhelming presence through the first 100 pages of the novel.

On the other hand, I’m a father and I happen to have a daughter. And spoilers aside, it’s difficult to sympathise with Bigger once he commits his heinous crime. Because heinous it is, albeit accidental. It’s this dichotomy that places my liberal heart on the line of fire. I’m forced to feel for a criminal whom the society surrounding him has left no other way for him to express his frustration.

The book is written in the third person singular, however, I keep feeling like I am in the first person singular. And this is the first time this has happened, which attests to the good writing Richard Wright shows.

To sum up, I’m bruised and battered by the novel, and yet, I’ll soldier on, like the occasional literary masochist I can be, hoping that in the remaining 100-odd pages I can find the manna that Bigger deserves. Even if at heart I disagree with his deeds completely.
Read the second part of this review here.
Copyright 2007
Posted by A Cuban In London at 10:51