Music for Mind and Body 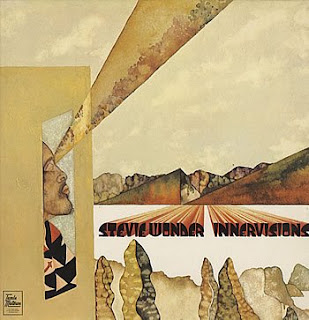 I have a confession to make. Up until 1996, the only Stevie Wonder I knew was the 'I Just Called to Say I Loved You' and 'Ebony and Ivory' guy. It's alright, you can stop laughing now. Because I knew the words to the former song I was suddenly flavour of the month, probably even of the year in my school (remember, this was Cuba in the 80s, foreign music took ages to get to us, if it ever did!) and this even got me brownie points amongst the members of the opposite sex. And when you're 13, every little helps. Anyway, it wasn't until I met my wife, Suzette Rocca, that the real work by this talented musician finally reached me. Innervisions, Talking Book and Songs in the Key of Life were my introduction to the genius of Stevland Hardaway Judkins. But what was it that really attracted me about Stevie's music? Well, there're his skills at playing pretty much any instrument. There's also his knack at writing songs. Yet, what came out on top of all that for me was his musicianship, and I mean that in the broadest sense. Listening to a tune like Living for the City made me realise that you could be socially conscious whilst at the same time building up a tune of so many different components so as to totally overawe the audience. It's the togetherness and cohesion that do it for me. It's Sheila Wilkerson in Don't You Worry 'Bout a Thing and Willie Weeks in He's Mistra Know-It-All. This is then replicated in Songs in the Key of Life where As has become at least to this Cuban the sweetest love song ever with the best instrumental solo you can listen to on this side of heaven. Shame that Mary J Blige and George Michael left it out in their cover version. And that's what I like about music from the 'good ol' days'. The bassline of 'The Ghetto' by Donny Hathaway wherepoun you could pretty much build another musical Empire State Building. Or Mongo Santamaría's 'AfroBlue' where, as the percussion subsides, the horns take over slowly, softly and rhythmically, always in crescendo until the song reaches a delirious apotheosis you can only dream about. And listen to.
So, to sum up, tonight I just wanted to honour one of the little wonders of the musical world, especially in moments like the ones we're living now when rampant commercialism ravages and loots what's left of talent in the music industry.
Copyright 2007
Posted by A Cuban In London at 22:45