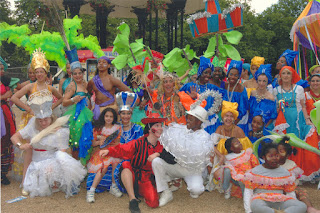 It had rained in the morning and I was expecting a washout in the afternoon. I was, in fact, psyching myself up to perform in a torrential downpour. Fortunately, that didn't happen. The only downpour came from the wonderful atmosphere of camaderie and goodwill present throughout the whole event. Linda Petty and Guillermo Davis, the brains behind the Carnival Comparsa, managed to gather some of the most outstanding and colourful performers around (including yours truly) to represent with a few master strokes the diversity of dance hues Cuban culture has. Inside the tent the hurly-burly of dancers coming and going brought back memories of my time as a performer with the Conjunto Folclórico de la Universidad de la Habana and I have to admit that the nostalgia got the better of me. It's been some time since I had the opportunity to share the stage with such a marvellous group of performers.

At around 5.15pm we started making our way around the park, stopping occasionally to show off our dance skills to the enthusiastic audience who had gathered at Southwark Park. As I was performing Oggun, my grin was seriously restricted, to my own chagrin, I must admit. There were loads of Cubans around and as we approached the stage more familiar faces could be seen doing the call and response so characteristic of Comparsas: "Ahora que vivo en Cuba libre, ahora que vivo en Cuba libre, a cantar la Internacional... And the people swirled and spun, and they drank and got drunk. You could be forgiven for thinking that you'd just strolled into a barrio in Centro Habana or Habana Vieja. I felt euphoric and I can safely say that the vibe was pretty much the same around me.

Outside the tent now and more down to what a Cuban Festival is and more importantly to the perception of Cuba in the UK. Why is it that Cuba is equalled only to 'salsa'? I'm not in disagreement with the notion that salsa, New York labelling aside, is a pure Cuban phenomenon. The main ingredients come from Cuban son and even the word 'salsa' was coined first by Ñico Saquito back when my Grandma was still chasing chickens in Güines as a knee-high grasshopper. But there's more to Cuba than just 'salsa'. A few years ago I visited the Barbican where there was a special celebration for the forty years of the Cuban revolution (Boy, El tiempo pasa y nos vamos poniendo viejos) and I was surprised to see Edesio Alejandro amongst the musicians on stage. Pleasantly surprised, I hasten to add. His music is the flipside of the coin of our cultural make-up as a nation, But you wouldn't know it from the acts that normally make it to the bill of so-called Cuban events. Nothing wrong with these acts, by the way. Cuban hip-hop has earned its place amongst the main performers of the genre and our dance music, call it son, guaracha or changüi, have been the main staples of our culture througout many decades. But we also have brilliant singer-songwriters, Silvio Rodríguez, Santiaguito Feliú and Gerardo Alfonso to name but a few. We boast some of the better pianists in the Americas, Chucho Valdés and Frank Fernández come to mind and we have good pop bands that have made inroads into genres that were considered no-go areas before or that were not considered at all, Afro-pop anyone? Síntesis and Mezcla are good examples of this. So, in the same way that Glastonbury has its chill-out tent and its dance tent, I would like someone to come up with a tent for Liuba María Hevia or Sara González.

Now, now, I know I'm dreaming and I'm just waiting for someone to snap me awake. At the end of the day, it comes to money and whilst financial matters don't get resolved, we will continue to 'bop till we drop' to the sound of our sensuous and energetic Cuban salsa. And you know what? Give it to me like that any day, I'll take it!