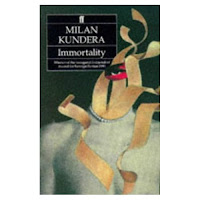 I'm in Kundera's territory now. And I had to swim to get here. There I was, tormented by my recent reading of Richard Wright's book, The Native Son (more to follow) when I caught myself looking quite attentively at Mr Kundera's 1991 effort to explain the theory behind immortality. Or should I say, to ask us questions about it. Because that's what Messieur Kundera enjoys doing. I was the hopeful and confident reader sitting comfortably on my beach, when up in the distance there appeared this thoughtful piece of work. I knew that in order to reach that opposite coast, I would have to get wet, and reader, I am soaked.

Soaked but happy. Kundera starts the novel in the same fashion as he did in 'The Unbearable Lightness of Being' and 'The Joke'. A casual observation becomes a philosophical dictum, in this case, the intrinsic relation between who we are as human beings and how we want to be seen and remembered as... icons, despots, poets? No, reader, dictum is actually the wrong word as Kundera does not so much impose his views on us as he asks us to re-consider the ancient question as to how we would like to be remembered. He already assumes that that is as much a human trait as sleeping or farting. For Kundera, the plot, as usual, is nothing but a means to get to an end. In this case, his end is to explore the nature of of human relationships, amongst ourselves, and with ourselves, and also with our selves. Very important the last one. No wonder the man got a degree in philosophy. But he doesn't preach, he teases. 'Immortality' is full of playful moments and it's always a joy to find a writer having fun whilst writing. You might think that sentence an oxymoron. 'I thought that writers always had fun when writing'. Well, no, the majority of writers want to write the perfect novel and when they finally realise (either after finishing writing it or handing it in to the publisher) that all they have is a simulacrum, and a poor simulacrum at that of their dream, they fall into despair.

Because the novel must be true to itself, and Milan Kundera understands this better than most people. Like a good sculptor who concentrates their efforts on first, to make and then erect a statue, the process is everything Kundera cares about. Immortality is divided in seven different stories and each one of them deals with this concept in various ways, but throughout them all the thread is the same, I want to be remembered.

There's repetition in Kundera's oeuvre, but he'd already made it clear in his masterpiece 'The Unbearable Lightness of Being' (by the way in both Spanish and French, the title is 'The Unbearable Lightness of the Being' and I think this semantic difference is important) when he proclaims his famous 'Es muss sein'. Actually, it's not him, it's Beethoven, but let's not get picky, shall we? At times, I feel like asking him the question: 'Muss es sein?', only for his answer to surely be: 'Ja, es muss sein'. And it makes sense. Through his repetition of phrases and ideas, he shows the evolution and the interrelation of the situations he describes. But, then again, Kundera is like marmite, either you like him, or you don't. As a writer, he's a agressively intelligent and in countries like the UK, where self-effacement and self- deprecation are national sports, this seriously damages the relationship between reader and writer. This novel, Immortality, whose central theme seem to focus (I have not finished reading it yet) on both the individual's immortality and that of the novel, or art, broadly speaking, defies the very idea of collectivisation lauded so much in the first few decades of the 20th century. Also, historical figures, like Napoleon and Goethe, get given walk-on roles, not so much for what they achieved in their lifetime but for how they went about trying to achieve their immortal status, Napoleon by sticking his right hand through his coat, Goethe by rejecting and accepting later a former paramour. It's similar to the chapter in 'The Unbearable...' where Kundera equates divine powers with excrement. It's hilarious, but the laugh is inside, it's a knowing giggle. And it stays.

I'm in Kundera's territory and I'm enjoying every single minute of it.