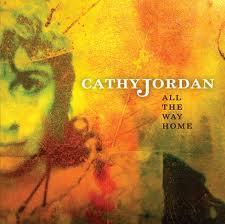 Some voices arrive in one’s life without any fanfare or red carpet treatment. They’re not the type to be found at presidential inaugurations, miming or not. They’re rather the kind to offer a seamless, smooth and meditative transition from past to present. On their (sometimes) puny shoulders these voices carry a country’s cultural traditions, occasionally with a modern twist. Cathy Jordan is one of those voices.

Formerly of Irish band Dervish, Jordan’s debut album, All the Way Home, turned up on Killer Opening Song’s doorstep a cold morning last November. It has since barely left its stereo. The first track, The Bold Fenian Men, is even on K.O.S.’s mp3 player for when it goes out jogging.

Haunting and beautiful, The Bold Fenian Men is an old school Irish ballad that abracadabras the way into a record brimming with disarming intimacy. The melody, originally written by Peadar Kearny, is part of the canon of songs with strong Republican sentiments that permeates the Emerald Isle’s folklore. On the clip below Cathy performs the track a capella (click here for the album version), thus, bringing an otherworldly quality to lines like 'Tis fifty long years since I saw the moon beaming/On strong manly forms, on eyes with hope gleaming/I see them again, sure, in all my sad dreaming/Glory O, Glory O, to the bold Fenian men.

Part of what makes All the Way Home a must-have album is Cathy’s sheer quality as a singer coupled with the musicianship of her collaborators. Obviously her voice takes centre stage; however, it is far from being the sole focal point. The arrangements are excellent, especially on tracks such as The Road I Go, In Curraghroe and The Jordan Jig, on which she plays the bodhrán, the Irish frame drum. Although All the Way Home is not as energetic a record as the ones she released with Dervish, the album still packs a mighty punch. Nowhere is this clearer than in the title track, a beautiful and rousing coda to a fine collection of songs.

It’s worth remembering at this point the reason why Killer Opening Songs exists. The genesis of this almost six-year-old section can be traced back to the Gospel according to Rob Gordon. Rob (played masterfully by John Cusack) is the lead in the movie High Fidelity. He is the saint patron of heart-broken, male thirty-somethings who still organise their record collection according to the date when they bought a particular record for a girlfriend or friend (And If I want to find the song "Landslide" by Fleetwood Mac I have to remember that I bought it for someone in the fall of 1983 pile, but didn't give it to them for personal reasons). It was Rob’s last words in that movie that gave birth to K.O.S.: “The making of a great compilation tape, like breaking up, is hard to do and takes ages longer than it might seem. You gotta kick off with a killer, to grab attention.”

Just like The Bold Fenian Men as sung by Cathy Jordan. A Killer Opening Song.

Next Post: “Sunday Mornings: Coffee, Reflections and Music”, to be published on Sunday 3rd February at 10am (GMT)