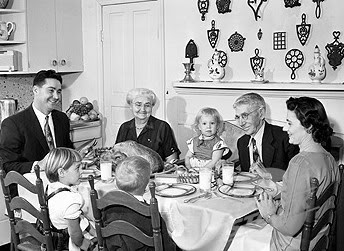 Some years ago I was at a party talking to a fellow Cuban when an acquaintance of ours (another Cuban) happened to come into the room. We all greeted each other and I remember answering his question “How is it going?” with: “A la marchita” (Going). I don’t recall hearing myself using the phrase but the bloke who’d been sitting with me until that moment looked at me as if he’d just seen an alien.
“A la marchita” is not a form of address we use regularly in the largest island of the Antilles. And my English translation doesn’t really do the phrase justice. It fails to convey the old-fashioned sense of it. The only other person I ever heard using it before was... wait for it... my father.
“They f**k you up, your mum and dad/they may not mean to, but they do/they fill you with the faults they had/and add some extra, just for you”.

Philip Larkin got it almost right when he wrote This Be the Verse. Our parents’ approach to child-raising (as good-intentioned as it is) is probably the reason why many of us rebel in our teens. But then time marches on and one day we catch our reflection on the bathroom mirror and... Aaargh! Who’s that looking back at me? Could it be that...?  No, yesterday I had my own ears, mouth and mannerisms. And today they all look like... Even the way I scratch the back of my left leg with my right foot is just like... mum’s (or dad’s).

Up until that moment at the party I’d never realised how much I had metamorphosed into my father. There had always been comparisons between him and me, but of the normal kind and they were also easier to accept when I was little. But on closer inspection I noticed that my habit of bringing up song titles and linking them to random words in conversations and my current lectures to my fifteen-year-old-son (delivered with a professor-like, stern tone) were taken straight out of the Cuban In London Senior’s book.

In the novel I’m reading at the moment of writing this post, Life is Elsewhere, by the Czech writer Milan Kundera, the main character, Jaromil, aspires to become a poet but he cannot escape his mother’s ever-looming shadow. Kundera is a master at describing a person’s inner conflicts and Jaromil’s love-hate feelings, as a teenager, towards his progenitor sum up pretty much how we feel about our parents at that difficult age. Yet, once we arrive at middle age and find that we resemble somewhat those who are responsible for our existence and the good and bad in us (hopefully more of the former than the latter) we react with mild horror.

In my case it’s not just my father’s phrase “A la marchita” that has made me wonder if it was worth me running away, metaphorically speaking, all those years ago from my parents’ overprotective mantle. The first time I chastised one of my children, I remember using exactly the same words my mother used to utter when she gave me a tongue-lashing. What was weird about it was that, unlike my father’s old-fashioned greeting which I can’t recall saying, I plagiarised my mum’s words on purpose. Has that ever happened to you, my dear fellow bloggers and readers? Has any of you started to resemble your parents yet? And, is this (un)conscious copying one of those facts of life that we must resign ourselves to accept, like the assumption that our offspring will one day get married, have children, a good job and a house, although not precisely in that order?

Maybe it is fear what we’re dealing with here. And this fear of behaving like our parents is deep inside a fear of not being original. After all, part of our success in life (and I’m not talking of the economic side of it) is based on the idea of creating. Creating a family, creating a home, creating an experience for ourselves. And the fact that perhaps behind each act of creation we’re involved in lies the ubiquitous presence of mum and dad is sometimes too much to bear. Larkin, then, was on to something.

Next Post: “Killer Opening Songs”, to be published on Wednesday 30th January at 11:59pm (GMT)

Labels: A Cuban In London, Apocalyptica, Cubans in London, music, One, Philip Larkin