You know the drill. Woman (regardless of age), wearing short skirt and high heels, walks past construction site. Wolf-whistling ensues, comments are made about her physique, leering eyes follow her figure... until the next member of the opposite sex strolls by. Sometimes (rarely, actually) well-thought compliments, what we call "piropos" in Spanish, accompany the attention heaped on the woman. But, most of the time, the woman alluded to is subjected to a barrage of sexual profanities, especially if she refuses to acknowledge her ad lib audience. And despite the overt, aggresive nature of the act of which they are ultimately responsible, the men involved in this daily routine still use the same word to label their targets: sluts. 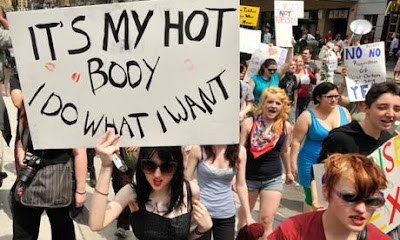 Depending on how you feel about this term, you might have agreed or disagreed with the recent protests by the Slutwalk movement in Canada and the USA. Sparked by comments made by a police officer in Toronto, who advised female students not to dress provocatively, the marches' organisers quickly rallied on Facebook and Twitter and coordinated events in different parts of the world. Their main objective was to remonstrate against a culture where the victim is usually made to feel guilty for the crime that has been perpetrated against her.

Noble effort or naïve idea? The jury is still out on the long-term effects of the Slutwalk movement but what no one can deny is that its members have helped raise awareness of a social phenomenon that is tacitly acknowledged. If a woman dresses in a certain way, she might trigger off reactions of an unwholesome nature in other people, i.e., men. And she's the only one to blame. Unfortunately, I count a younger version of myself amongst those who used to buy that argument. The problem is that it's not that simple.

With the passing of time I have realised that the Neanderthal Beast vs Sassy Lady of the Lake scenario infantilises both sides. In men's case, it has become a sad indictement of our attitudes to women as it lumps us all in the same category and erodes the nuances that our rapport with the opposite sex involves. In regards to women, it victimises them, rather than strengthening them. It's also a handy way for (male) religious leaders to clamp down on female freedom of choice, as they can claim to have the answer in their fight against the 'decadent west', namely, cover up. Lastly, it points at a supposed sexual availability that might not be what the lady in question has in mind.

The Slutwalk is more than just a movement about women's rights. It goes deep into the territory of sexual assault, rape and domestic violence. The second of these themes is the subject of a future column, so I will leave it for now. However, what's interested me so far is the way many of the participants have gone about rolling out the campaign.

Scantily-clad and holding banners that read: "Sluts Say Yes" and "Sluts Pay Taxes", the protesters have shown sass and boldness. How much of the latter gets absorbed by the former is anyone's guess. And there lies the rub. In the UK, straight after the marches were announced the tabloids went to town. Whether the movement's attempt to reclaim the word 'slut' can cope with the likes of The Sun and other redtops hijacking the upcoming march in London and turning it into a Page 3 double-spread should be taken into account. My other concern is that by focusing on the physical side of the debate (how a woman dresses), as opposed to the moral and educational angle of it (how we convey the message to boys and girls, especially boys that 'no' means 'no' and 'yes' means 'yes') the Slutwalk can become a parody of itself.

This debate about the right to wear what one wants comes at an interesting time. In France, a woman can be issued with a fine on the spot if she's wearing a veil, yet in the UK, you're also penalised if you dare to bare a bit of leg. That the latter is not enforced by law is no succour, as the connotation is the same: women, you have forfeited your right to do with your bodies as you wish, we, men, call the shots. Plus ça change.

Will misogynists feel threatened by the popularity and radical agenda of the Slutwalkers? I doubt it. In the era of smartphones and social networking fora, those protesters taking to the streets of London next month will very likely end up on dodgy websites or as a tabloid editor's smutty headline. However, at a time when women still have to invoke Julius Caesar's famous phrase "Alea jacta est" everytime they walk past a building site, or worse, happen to find themselves in a dark alley at night, the fact that they are coming together - young and old - to say they've had enough should be applauded and supported. After all, the Roman leader did cross the Rubicon in the end.

Labels: A Cuban In London, Blondie, Cubans in London, music, One Way Or Another