You meet someone who makes you feel special. From the word go there's that little spark, that magic that comes as a consequence of falling head over heels for their eyes, their accent or their laughter. Years later, when you look back on that relationship, long dead, you remember how at first he/she 'moved like the sunset'. Let's also add that he or she comes from up north, wherever that north might be in your country of residence. You think you'll be OK. 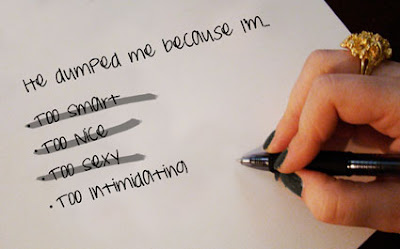 But OK, you're not. The relationship with your 'northern lad' (lass?) turns out to be a half-baked cake affair. An unmoistened liaison that leaves you 'only wet because of the rain'. Tucked under your duvet you lose hope little by little, craving warmth and companionship but knowing that outside "it's gets so fucking cold..."

I can see why Tori Amos uses the 'f' word in 'Northern Lad'. It's one of those rare examples where swearing is perfectly justified and understandable. You offer your whole self to another person, warts and all, only for your partner to throw it back at you, highlighting flaw after flaw after flaw. Or what he/she might are your flaws and in reality they're just your quirks. And don't we all have quirks?

I've always hated lazy and mindless cussing in songs. The kind that seems to spring up when inspiration and talent are not abundant. Too much contemporary music comes across as a ready-to-drive vehicle for profanity. The type you might find in the discounts section at your local supermarket. Get two swearwords for the price of one.

But occasionally, you find certain passages in melodies in which only a strong word, or one that is not normally used in polite conversation, will do. Queen's "Death on Two Legs" would not be the hard-rock, top-quality ranting it is were it not for Freddie's "But now you can kiss my ass goodbye". It's done angrily but with élan. The same finesse is found in another record by the same band, "Let Me Entertain You", from their 1978 album 'Jazz':"We'll have a son of a bitch of a time". It's all to do with context. This is a song about a group that are "Gonna rock you gonna roll you/Get you dancing in the aisles/Jazz you razzmatazz you/With a little bit of style". Very different from 50 Cent's 'Candy Shop' where his promise (or should that be a threat?) to 'take you to the candy shop/I'll let you lick the lollypop' is enough to pull out a gun and blow your brains off. His reference to oral sex is as subtle as an anti-monarchist ripping a picture of Wills'n'Kate into shreds in the middle of the Mall and calling it a 'nuanced republican statement'.

Pop songs are so brief (only between three and three and half minutes long) that if you want to include a couple of 'naughty' words, you'd better hit the right spot quick and effectively. Radiohead's 'Creep' is a good example. In this paean to a woman (methinks it's a lady the object of the singer's affection), Thom Yorke plays the oddball who falls for an 'angel'. All the signs of infatuation are there: her skin makes him cry, he thinks that she floats like a feather in a beautiful world. That's why he wishes he was special. But he isn't, and then Thom and co. deliver the masterstroke. In talking to the woman (probably when she isn't looking), Mr Yorke cries out: "You're so fucking special". What makes the 'f' word stand out is that it sits at odds with the beautiful and poetic language Radiohead uses in the rest of the song. Moreover, this swear term is only ever utilised as a refrain, thus, creating a chorus of disappointment and despair. Finally, unlike Tori's 'Northern Lad', in 'Creep', the protagonist is not interested in his lover's faults; on the contrary, he idolises her.

Another way of interpreting the profanity in 'Creep' and the reasons for it, is to analyse the second verse: "I don't care if it hurts/I want to have control/I want a perfect body/I want a perfect soul". In those desperate lines there lies probably one of the strongest criticisms against the bodyfascism that has come to rule over our contemporary world in recent years. Alternatively, Radiohead was just taking the piss. And given the theme of today's column, I feel more than justified in using that kind of language. Have a brilliant week!