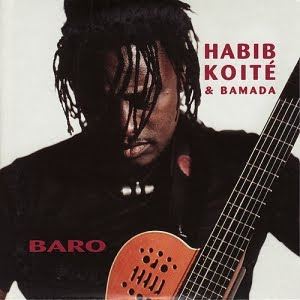 After the onslaught of Anglo-Saxon music we had last weekend (with some Spanish thrown in for good measure) as part of Radio Freekinternational, Killer Opening Songs will be focusing mainly on instrumental music, as well as performers from non-English speaking nations for the next few days.

And what better way to make this wish come true than to start with Malian guitarist Habib Koité?

Habib is one of Africa’s most popular and recognized musicians. Born in 1958 in Thiès, a Senegalese town situated on the railway line connecting Dakar to Niger, Koité comes from a noble line of Khassonké griots, traditional troubadors who provide wit, wisdom and musical entertainment at social gatherings and special events. He grew up surrounded by seventeen brothers and sisters, and developed his unique guitar style accompanying his griot mother. He inherited his passion for music from his paternal grandfather who played the kamele n’goni, a traditional four-stringed instrument associated with hunters from theWassolou region of Mali. His sound sometimes is very close to the blues or flamenco, two styles he studied under Khalilou Traoré a veteran of the legendary Afro-Cuban band Maravillas du Mali (hmm... you see? There's an expression of interest here). Habib's uniqueness lies in the fact that he brings together different styles, thus, creating a new pan-Malian approach that reflects his open-minded interest in all types of music. Koité has played at most of Europe’s major venues and festivals, including the Montreux Jazz Festival, WOMAD, and the World Roots Festival.

The track Killer Opening Songs brings you this week appeared in his 2001 album, 'Baro', a musical crusade on behalf of traditional Malian instruments like the harp-like kora, the lute-like ngoni, the balafon and the wooden xylophone. 'Batoumambé' is a beautiful melody by an impressive performer with one of the most enthralling voices I've ever heard. Enjoy.