Aged five and bedridden I was given my favourite present ever.

No, it was not a new fabulous train set for Christmas. I am Cuban, we did not celebate Christmas in those days (1976). It was not a bicycle either. That came afterwards. It was definitely not a 'King Arthur and the Knights of the Round Table' set with plastic figures; a toy I so much coveted after seeing one in my mate's house.

No, the best gift anyone has ever bequeathed me was to teach me how to read and write, especially the former. True, it was in a hospital, I had just fallen ill with the condition that was to accompany me for most of my childhood and part of my teenage years, chronic gastritis, but the seriousness of the disease was offset by the enjoyment of learning how to read my first words. And it was my mother whom I owe this pleasure. 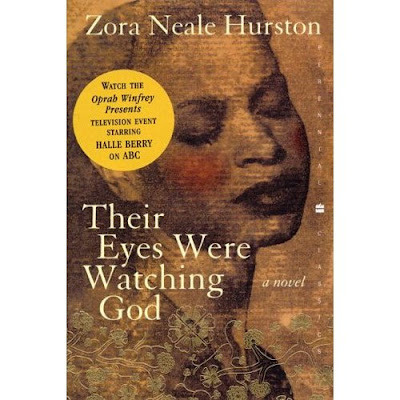 So, when now at the ripe age of thirty-six I read a book like 'Their Eyes Were Watching God', I say to myself: Thanks, Mum, thank you very much indeed.

Because Zola Neale Hurston's famous novel is a joy to read. Please, reader, understand that this pleasure does not derive from any literary sadism or voyeurism exercised by yours truly. Other people's suffering is as much a pain for me to behold as my own one. It is Zola's writing style that brings these people's calvary so close to home and it is her mix of the literate narrator's voice with the highly idomatic black one that captivates me. You, reader, could be forgiven for thinking that I was under a spell whilst reading 'Their Eyes Were Watching God'. And you would be right.

The book centres on four characters, although, it is only two who take up more than two thirds of the story. Janie Mae Crawford, a black woman with straight, Caucasian-like hair who defies gender stereotypes by insisting on her own independence and wearing men's dungarees. Tea Cake, Janie's third husband and real love, who is twelve years her junior and who, from the first moment they meet, impresses her with his wit and energy. A third character, Jody Starks, forays into the novel early on and takes up about fifty pages of the book, during which time he marries Janie, takes over nearby town Eatonville, thus, becoming its mayor and satisfies his political ambition. Crawford's first husband, Logan Killicks, is the fourth character. He offers her the financial security Janie's Nanny seeks to secure for her granddaughter. Other characters pop in and out of the narrative throughout the 193-page literary journey, enriching the story as they interact with the four personages or with each other.

To me the main strength 'Their Eyes Were Watching God' (TEWWG) has is the use of an autonomous imagination, where the narrative of the novel shifts from third to a blend of first and third person. This points at a total identification with the main character, Janie Mae Crawford, on the author's part. And it is in the voicing of this woman's innermost feelings and emotions where Hurston is more successful. Whereas usually African-American fiction arrives shrouded in a large political discourse, TEWWG comes with no baggage other than the tale of a woman fighting for her own independence but without naming the process she's involved in. It could be said and it has already been mentioned, not least by academic and scholar Henry Louis Gates, Jr, that TEWWG is a feminist novel and Janie an 'accidental feminist'. In her understanding of the reasons why black folks gossip about her when she returns to the town she left a few years before with Tea Cake, Janie shows a maturity that belies her second-class citizen status. It's the same status, her second husband, Jody Starks, exploits to the maximum in his treatement of Janie as an object rather than as a person. And lest we forget, let us just recall that Janie is not just up against her husbands (especially the first two), but also against her own ethnic group's mentality, against white people and against society as a whole. In his thought-provoking book 'Sex and Racism', Calvin C. Hernton comes up with a hierarchy in US society where white men occupy the top position, whilst the lower echelons are taken up by white women, black men and black women in that order. TEWWG is a good example of this.

The other strength of the novel lies in the use of language. As I attested at the beginning of this review, reading is a pleasure to me. More so when I come across books that make feel as if I have discovered language for the first time. TEWWG is one of those books. Hurston's poetic prose is unbridled and unadulturated. Throughout the novel I felt that here was an author who was not afraid to write because she was not afraid to live and it was that zest for life that most endeared to me. Sentences like 'Every morning the world flung itself over and exposed the town to the sun' are written with such literary bravado that one can't help but consume them slowly, letting each word slide down one's throat.

The issues of race and racism have a more natural and fluid feel in this novel than in many others by African-American authors where the approach is more black and white (no pun intended, although on second thoughts...). Through the interaction of the numerous characters in the book (both leading and supporting), we become acquainted with the lives of these folks, their dreams, their shortcomings (Tea Cake, Janie's true love, beats her once, thus showing his own weakness and fallibility), their disappointments and their achievements (Jody Starks, Janie's second husband, rallies the residents of Eatonville to improve the town's conditions, with excellent results). Above all, black people are presented as human beings and not as socio-political victims. The few times when politics rears its ugly head (for instance, the discussion between Janie and Mrs Turner about Booker T Washington does not amount to more than a few lines), Hurston keeps it in check and the issue is an addendum rather than the kernel of the chapter.

Despite the success of 'Their Eyes Were Watching God' when it first came out, its author was largely ignored in the 50s, 60s and early 70s until the African-American writer Alice Walker published her ground-breaking essay 'In Search of Zola Neale Hurston' in 1975. This could explain as to why more people have read Zola's works since that year onwards than in the period between 1934 (when she was first published) and 1975 and could go some way to illustrate Hurston's influence on other African-American writers, mainly female, such as Toni Morrison, Gloria Naylor and Alice Walker.

TEWWG was harshly criticised when it first saw the light in 1937 by none other than Richard Wright (read my review of 'Native Son' here and here). Yet, Zola's mythic realism, dense with lyrical black idiom has endured the battering of the years and found a much welcoming home in the eyes of new readers. And I am lucky to be one of those. Once again, thanks, Mum.