Carry Me Down (Rock Symphony)

Certain books arrive in a frenzy of prizes and awards. The buzz is such that you can't look anywhere without coming across the author's face plastered all over billboards and buses. Some others come to one wrapped in the warm embrace of a friend's recommendation. Some, you just pick up because of loyalty to the author (Rushdie, Atwood, Allende) and they hardly ever disappoint you.


But there are certain books that arrive on your doorstep unnannounced, with a sleeping bag in hand and ready to crash over on the sofa. Their tenure lasts exactly the time it takes you to read them and when you are done, you wish they stayed with you forever. 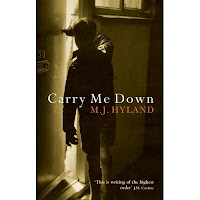 'Carry Me Down' is one of those books.

Told in the first person singular, the novel deals with John Egan, a boy in an adult's body, whose obsession for the 'truth' and the Guinnes Book of Records leads him into uncharted waters which threaten to drown him. John's firm belief in his knack for detecting lies proves to be his demise. This element coupled with the break-up of his home life, cause him to go off the rails, even coming close to losing his sanity.

Hyland's main accomplishment lies in the depiction of his characters as a messy array of human contradictions. John's father is a hard-working man who cannot find employment. This situation causes his mood to swing from affection to despair and almost violence easily. His wife, John's mother, is a benevolent, charitable woman who loves her only child dearly, and cares about him a great deal, but who feels powerless when faced with the cards life has dealt her. In the midst of all this, John's body begins to respond to the onset of puberty (his voice starts to break, he grows taller) and he has no means of coping with all these changes.

The novel is set in early 70s Ireland and manages to eschew many of the stereotypes that other books dealing with this European country fall into. For a start, it is a very personal novel, where the social and economic background is nothing but that, a backdrop. Secondly, the tale is a sympathetic take on a boy's transition from childhood to adolescence and far from condoning or condemning his actions, the author allows John's thoughts to come to the fore. Thirdly, his parents' relationship and the problems that arise within it are not a black-and-white issue. The grey areas are too numerous to mention. And finally at various points in the novel, Hyland plays a sleight of hand with us readers, leading us into John's nascent sexuality and sexual interest and how this manifests itself in relation to his mother. To say that the scenes are too ambiguous and too close for comfort is too mild, but Freud would have had a field day with the dialogues and imagery arising from John and his mother's encounters.

'Carry Me Down' follows that path of wonderfully written novels about children and/or adolescents. The narrative is tight and concise, the characters and plot are credible and the dénouement is optimistic. It, thus, joins a long list of books by the likes of JD Salinger (Catcher in the Rye) and Arundhati Roy (The God of Small Things) where the voice of the younger person is given a platform wherefrom to let us know their innermost feelings and desires.

Labels: A Cuban In London, Carry Me Down, literature, M.J. Hyland