- Papi, tengo dos piezas de noticias que darte: una buena y una mala. (Dad, I have two pieces of news to give you: a good one and a bad one)

I just could not help it and burst out laughing incontrollably (caveat for parents who are teaching their children a second language, NEVER laugh AT the little cherubs, but WITH them!). Son looked at me puzzled and with eyes wide open. What had he said that had caused my giggle? Did I know beforehand what he was about to communicate to me? Was I able to read his mind?

After sitting down, having a drink of water and reassuring Son that I was laughing with him and not AT him, I finally let him know the cause of my sudden mirth. 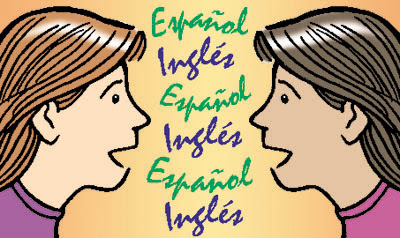 It's a common mistake that I will keep returning to in future posts. English and Spanish do cross roads sometimes. Words, phrases and grammatical constructions do sometimes meet in the middle. The other night as I was reading them another short story from that essential children's book called 'La Edad de Oro' we came across an expression that made the children feel relieved that sometimes a common ground can be found between their two linguistic worlds. It was 'terca como una mula' and it appears in the tale 'El Camarón Encantado' (The Enchanted Shrimp). Son was the first one to translate it and he was glad to find a direct conversion into one of his mother tongues, 'as stubborn as a mule'.

But when these two very different languages lock horns the results can be very confusing. I've referred in the past to false cognate words. These are words that although spelled similarly they have different meanings. Take 'exit'. A Spanish speaker will think that it means 'éxito' (success), not realising that even the word 'success' is a false cognate as such, because a Spanish speaker will think it means 'suceso' (happening, event). Confusing? Yes. Amusing? You bet.

Son and Daughter do tend to force English constructions into Spanish sentences to my chagrin. But by now, they know my reply like the refrain to a very annoying song: 'Please, don't speak English in Spanish'.

Ah, and about those 'two pieces of news'. The good one was that they'd decided to watch the X Factor final another day after having recorded it last Saturday, thus not disturbing my Sunday evening newspaper-reading arrangements. The bad one was that they would be watching it on Monday evening in the lounge, which is normally the time when I come back from jogging and finish my work out and stretches. Oh, well, at least Son learnt a valuable Spanish lesson!