Living in a Bilingual World (Moderato) 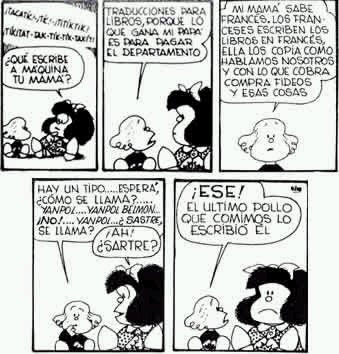 To swear or not to swear? Esa es la pregunta (That's the question)
And what a question! Especially for someone like me brought up in a family where cursing was frowned upon and my limited childhood vocabulary included the two notions 'palabras feas' (ugly words) and 'malas palabras' (swear words). At age five or six I experienced my late Nana's wrath when I dared say the word 'jodi'ó' as in 'la bicicleta se jodi'ó' (the bike broke down). I cannot remember whether it was a clip round the ear or a 'tapaboca' (a slap in my mouth) but I got smacked pretty hard.
So, with these thoughts in my mind I ventured into unknown waters recently when I explained to Son the meaning behind a particular track he'd been humming to lately. It was 'Ciudad de Pobres Corazones' by the Rosarino musician Fito Páez. Son was already familiar with the Argentinian's music as I play his hits regularly at home, but this particular track has an intoxicating melody and beat that make it stand out from the rest of the songs that appear in the album.
- Do you know what he says in the song? I asked him whilst I was driving.
- No, what is it?
- I think he's talking about Buenos Aires, and the times when the military was in power. He's feeling despondent and angry.
- Uhhh...
- And he's using a word that is actually a four-letter word in that context.
- What do you mean?
- Well, the word 'puta' is used to convey the level of disatisfaction he feels towards the incumbent government.
- What's the equivalent in English?
- The f-word.
- (Gasps).
Did I do right or wrong? My intention was not to become 'Papi Cool', but merely illustrate to him how some of the songs in Spanish he listens to contain 'bad words' (a caveat, though, the Latin pop, rock and salsa I play at home is heavily sanitised). However, Wife and I have yet to have that important 'talk' about the use of certain words, especially as Son is fast moving forward to adolescence. He was nonchalant about the whole 'p' word but I was left restless. Have I opened a can of worms? Have I brought upon myself Claudius curse 'When sorrows come, they come not single spies, but in battalions' by opening this Pandora's box? As a Cuban I admit that swearing still stuns me, especially when it is done gratuitously. Some Spanish-speaking cultures are more expletives-prone, not least, the Spanish culture. Many years ago, Juan Echanove, a popular Spanish actor, went on the now defunct live television show 'Contacto' with the then presenter Hilda Rabilero. This was a programme which thousands, if not hundreds of thousands of people tuned into at 6pm every Saturday evening. Imagine people's reaction when Echanove innocently uttered the 'c' word (that's 'cojones' by the way and I apologise profusely to anyone who feels offended by the epithet, just writing it makes me squirm) and Hilda went silent. Ten seconds elapsed. And then Juan, realising his error, asked the now famous question: 'Oh, is it because I said 'c...'? Cue embarrassment, shame and Hilda's nervous smile. Other cultures in Latin America are more cautious about their cursing. In Cuba, words even like 'carajo' are scorned and the person uttering them admonished.
Yet, there is another side of me that would like to see Son, and Daughter, too, use these words constructively. I guess it is to do with pride and amor propio. Or just with the desire to see them using words that, although high in the cringe factor, are part of their own linguistic DNA.
And I hope they learn when, where and with whom to use them, too.
Copyright 2007
Posted by A Cuban In London at 18:19