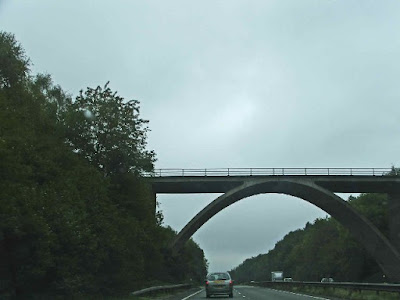 If you turn left and take the second exit at junction 5 of the M25 going westwards near Sevenoaks onto the A21 Tunbridge Wells-bound you are presented with a spectacle of breath-taking beauty. As the road bends down in a precise and mathematical curve the shrubs and bushes lining up on either side of the highway take on a deeper and darker shade of green and nature seems to become an architect in its own right. The British countryside looks welcoming and inviting and the traveller basks in the summer sun streaming through the window.

Recently in August I undertook my first trip behind the wheel down the M25 motorway in order to go to my father in law's. As I was soaking up the natural perfection of my surroundings I thought of long-lost melodies or strange musical combinations I've come across over the years. Duets that have been completely mis-matched, improvised sessions that have pulled it off, associations that would have been better left in the planning stages and alliances that have confirmed my faith in music.

The latter is my first choice today. Take fellow Zodiacal sign Scorpio Canadian folk and pop music doyenne Joni Mitchell. Her personal and self-consciously poetic song-writing is miles away from the more combatant and soulful style of Marvin Gaye's. Yet in this cover of 'Trouble Man' it works wonders and the otherwise demure Mitchell even sashays on stage as the bassline keeps the song together. Also, it's such a joy of the 'oh-my-God!' type to hear her saying the words: I come up hard, baby, but now I'm cool /I didn't make it sure, playin' by the rules /I've come of heart, baby, but now I'm fine /I'm checkin' trouble, movin' down the line /I come up hard, baby, but that's OK /'Cause Trouble Man don't get in my way

I heard about this singer back in the summer and found a few clips of her on youtube.com recently. Her delivery is good, her voice crystal clear and her songs, though pretty basic, strike a balance between lyrics and rhythm. The fact Ayo's still based in Germany is also a plus for me as most artists these days feel that if they don't reside in an English-speaking country they won't be able to break through. Well, Ayo proves them wrong.

When I became hooked on rock'n'roll there were three basic guitar riffs that determined pretty much the music we played in parties. The opening of 'Whole Lotta Love' by Led Zeppelin, the first notes of 'Smoke in the Water' by Deep Purple and the funky and sultry sound of 'Satisfaction' by The Rolling Stones. I'd hazard to say that these three, together with The Kinks' 'You Really Got Me' and latterly The White Stripes' 'Seven Nation Army' make up the bulk of the must-learn-by-heart melodies that any aspiring modern guitarist keeps working on over and over. However, my favourite guitar solo belongs to a group that escapes classification and this is purely on the merits of their music.

Pink Floyd's 'Wish You Were Here' album arrived in a hazy adolescent cloud and now, more than twenty years after I first listened to it, still makes my eyes water. Its complexity lies in its simplicity. The opening track 'Shine On You Crazy Diamond' took on a deeper meaning when I found out who it was dedicated to. In fact the whole record was dedicated to one Syd Barrett, original member of the band and enfant terrible who went off the rails and died a year ago. With him the Floyd created a sound that defined psychedelic Britain. But that would be limiting the music prowess of a band that have always defied labels. Most people opt for the more commercial 'Dark Side of the Moon' album or 'The Wall'. To me 'Wish You Were Here' remains the stalwart piece of their career and personally a poignant memento for me. Also, the length of the opening guitar solo stretches in the same way as the M25 on a nice summer day.


Afro-Cuban music has filled up my life since I became involved with the Conjunto Folclórico de la Universidad de la Habana back in 1994, but even before that I was already venturing in Yoruba territory. With a grandmother who wore sackclothes on the 17th of each month and on 17th December made the pilgrimage to El Rincón, St Lazarus sanctuary in Havana, there was no way that I could escape the African influence at home. Also, my late aunt used to invite babalawos for religious consultations and I grew up with her lighting a candle to Elegguá every Monday morning. And rest assured, I never ate his sweets! So, it was with a lot of gusto that I threw myself into the vortex of Afro-Cuban teaching in the UK back in 1997 when I first arrived in Albion. And over the years I have grown even fonder of my students at Jackson's Lane and at The Basement now and the musicians I work with. The level of respect and seriousness I've witnessed in my sessions and in other tutors' puts the London Afro-Cuban scene in pole position. This respect and professionalism was multiplied recently with the creation of the Lucumi Choir, under the guidance of both Marta Galarrága and Daniela Rosselsson. I went to their first performance and I admit that I was a bit apprehensive. Why? Well, the reasons is simple. Back in the summer of 1997 I performed with Olorun at UNEAC (National Association of Cuban Writers and Artists) and the experience was mind-blowing. I knew about their work through the recordings they made with the now late maestro Lázaro Ros (ibaé), but the level of preparation before the performance was beyond my expectations. I did Elegguá and I enjoyed it immensely. So, it was with some trepidation that I came to a pub, whose name escapes me now, in the winter of 2006 to witness the making of history. Because ladies and gentleman, the Lucumi Choir pulled it off. The fact that some of its members have been dance students of mine, restores my faith in the central tenet of Afro-Cuban culture, the singing-playing-dancing synergy. And when I now play 'Changó' in the car, sung by the great Lázaro Ros I know that his legacy, at least in this part of the world, is safe.

And this is all for today.