Living in A Bilingual World (Allegro) 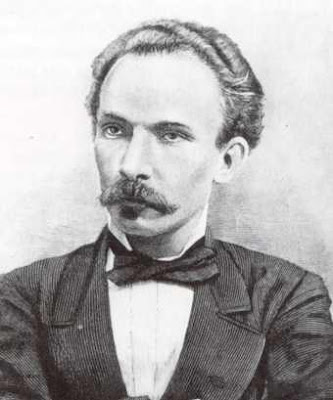 One of the most difficult aspects when teaching children a foreign language is to enthuse them about a subject that is close to you. In my case it was Cuba's National Hero, Jose Martí.
Martí is omnipresent in the Caribbean island and from the age of 5 or 6 children begin to study his oeuvre. Not strange then, that many of us grow out of him by the time we hit our teens. His purer than pure and whiter than white hagiographic status marks him out as an object of ridicule for those who like a little bit of pepper in their food.
Yet, in my twenties I went back to El Maestro, as he is widely known in Cuba, to study him a bit closer especially after the 'special period' hit my country. I found him to be surprisingly honest and his writing to be remarkably prescient.
Thus, many years ago I introduced Son to this man's most famous work 'La Edad de Oro' (The Golden Age), a compendium of short stories, poems and essays aimed at the younger generation. The experiment backfired, but not badly, I hasten to add. And this is the caveat to bear in mind when sharing your enthusiasm with your offspring, especially in a different language. Work, Work, Work. It's not easy. Recently my patience paid off finally and for the last two weeks Daughter, Son and I have sat down to enjoy the wonderful world of 'Meñique', the story of a very small boy with two nasty brothers who set off to the king's castle on a mission that has unpredictable consequences. A magic tale with a strong moral. Wisdom beats Strength any day, a lesson that the current incumbent at the White House would do well to heed. I have had to polish off my performance skills and re-enact the story using body, limbs, mind, voice and whatever I've been able to lay my hands upon. The outcome has been that both Daughter and Son were talking to each other the other night as they were lying in bed and I could not help eavesdropping on their conversation. They were both giggling as one recounted to the other how 'Meñique' had beaten the giant with his shrewdness and the latter's embarrassment at having being defeated by such a minuscule mortal.
And I could not repress a smile either.
Copyright 2007
Posted by A Cuban In London at 20:52