The photo opportunity was gone as quickly as it had arrived. He stood there motionless, looking up at one of the signs. The one about banknotes, cards, medals and coins. There was a beautiful incongruity in his manifest interest (curiosity?) in this particular shop. On the one hand he was doing his job diligently on this Victorian-era shop-frontage-filled pedestrian street: keeping the place clean. On the other hand, for a fleeting instant he allowed himself to become part of the small group of people venturing out in London’s West End after a heavy downpour. For that one second he was no longer binman, or as our more politically correct times dictate, rubbish collection officer or suchlike.

Cecil Court’s eerie silence was welcomed after an afternoon on which the only sound had been that of the summer rain. Once again, I was walking down alleyways, cul-de-sacs and narrow roads. Once again I wanted to “get lost”. Happening on the “Binman on Cecil Court” (and would that not be a fantastic name for a picture if I had managed to take it?), I felt as if I had to capture the innocence on his face as he scanned the displays on the window. I wondered if he was acquainted with the history of the place. I certainly was not.

Talking to one of the staff at one of the many bookshops lined up along the pedestrian-only street I found out a little about Dickens, Jewish refugees and renowned Hambling’s model railway shop.

I came out of the shop looking for “binman” but it was gone. The moment, that is. The “photo moment” was gone. “Binman” was still there, skipping around puddles, doing his job diligently: keeping Cecil Court clean. 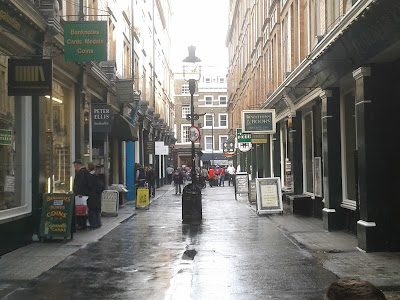 Next Post: “Saturday Evenings: Stay In, Sit Up and Switch On”, to be published on Saturday 24th October at 6pm (GMT)
Posted by A Cuban In London at 18:00