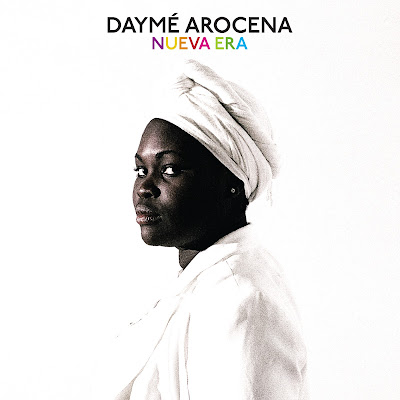 When it comes to music Killer Opening Songs is usually wary of hype. Big up an artist and call them “the next big thing” and our Regular Section of Introductory Tracks with Homicidal Tendencies will probably be heading in the opposite direction. It is chiefly to do with the fact that when it comes to art, and more specifically, music, K.O.S. likes to do its discoveries by itself, at its own pace and in its own time with no pressure from anybody. Sometimes, though, the hype surrounding an artist is well justified.

Up-and-coming Cuban singer Daymé Arocena deserves all the hype she has generated.

This young chanteuse has managed to combine elements of Afro-Cuban culture, soul, jazz and funk to create one of the albums of the year, Nueva Era (literally, New Era). The Killer Opening Song, Madres, is a fine example of risk-taking endeavour.

Rooted in a music-rich childhood (Arocena claims to have been singing since she was four), Daymé’s sound is one that belies her young age, yet her experience is evidence of her creative power.  She is a choir director, composer and arranger, in addition to being an extraordinary singer. Her background as a choir director shows in this K.O.S., from the multi-layered vocals to the piano and bass arrangements. Madres is about two of the better-known female Orishas in Afro-Cuban culture: Yemayá and Oshún, the two waters, the former is the sea and the latter the river. Sung in Yoruba and Spanish the song marks the arrival of Daymé, not just in the national, but also in the international scene, if reviews of her first concert in London last spring are anything to go by. Here’s an artist with an excellent vocal control and a heightened aesthetic sense.

It is important to highlight Arocena’s command in regards to her pitch-perfect voice. It would be too easy for her to fall into what Killer Opening Songs calls the “Mariah-Carey school of singing”. All high notes for the sake of it. Instead Daymé uses her pipes to explore as wide a range of vocal styles as possible. There is the mind-blowing scat in Don’t Unplug My Body, the soulful lament in the heart-rending “filin” Come to Me and the tongue-in-cheek in the salsa-lite El Ruso.

As mentioned before K.O.S. does not believe in hype. Sometimes, though, it will make an exception. This is one. Go out and buy the album.

Next Post: “Saturday Evenings: Stay In, Sit Up and Switch On”, to be published on Saturday 10th October at 6pm (GMT)