The recent news of the ticking-off British actress Helen Mirren gave to agroup of drummers making a hell of racket outside London’s Gielgud Theatre had me in stitches. The percussionists were promoting a gay and transgender festival but, without meaning to, were also causing distress amongst the audience watching The Audience, the play that had just earned Dame Mirren an Olivier Award the week before. Elenita came out during the interval dressed in full royal regalia and had a stern word with the musicians.

Humourous as this news was, it also made me think about theatre protocol. Especially those other instances when uncertainty gets the better of us. For example, when to applaud. 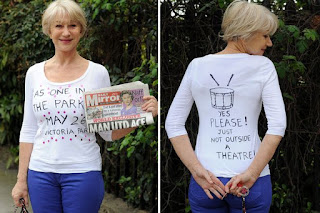 A few years ago I went to a Saturday morning classical concert at a church near where I live. This was part of a series of events organised by the local community in conjunction with the religious authorities based in the building. On this beautiful summer morning we were treated to works by Beethoven, Mozart and Liszt by a highly professional and successful quartet of strings and piano. I enjoyed almost the whole concert. The key word here is “almost”. What stopped me from getting lost completely in the music was the applause given by some members of the audience after each movement had been played.

Honestly I felt at a loss then. I had always believed that at a classical concert one clapped only after the whole piece had been performed and not in between movements. Plus, the “happy-clappers” were of one or two generations before mine. They were the same ones who had given me the “what is he doing here?” stare minutes before (let’s not go there, shall we? I’ll leave that one for another post) and therefore I assumed that they would have been well versed in the arts of when to applaud and when not to.

Another theory that sprung up in my head was that this was a British custom. I dismissed that one quickly, though. Neither my mother-in-law, nor my wife had put their hands together.

Applause in theatres is one of those areas I am never sure about. Take ballet, for instance. From the moment I became a fan in my mid-teens, I knew exactly when to clap and when to keep quiet. Not that it was always that orthodox. With a soloist or a pas de deux it was easier; once he/she/they finished doing their turns and the man and woman alternated showing off their prowess, it was the audience’s turn to reciprocate. Occasionally, though, a dancer performed an amazing move and the public broke into spontaneous applause. There were other times when we did it to show sympathy. Many years ago, my favourite ballerina ever, Lorna Feijóo, slipped calamitously during a performance of the Swan Lake. Suddenly there was a sharp intake of breath amongst the attending public. Lorna got up, dusted herself off - literally, by the way, oh, yes that was my girl! - and performed the thirty-two fouettés of the Black Swan as if nothing had happened. Well, we all went wild at the Grand Theatre of Havana.

Another time, if my memory serves me right, it was a play, not a dance, that got the audience on their feet and clapping like mad. It was during the premiere of Manteca (Lard), to me, the most radical play of 90s Cuba. Jorge Cao, one of the three actors on stage, turned towards the audience and delivered what seemed to me at the time a very clear and unsubtle message: He’s always there, wherever I go, he’s always there. We have to do something. If you (turning to the actor playing his brother) don’t do it, I’ll do it. I’ll have to... The public didn’t let him finish. In the small space that the Café Teatro Bertolt Brecht afforded us we all rose in unison and put our hands together in a compact and solid applause for what we thought naively was a critique of the then president Fidel Castro (spoiler alert! It wasn’t, the play centred on a pig the family was torn between killing and not killing for New Year’s Eve). The three actors (two men and one woman playing their sister) froze mid-action until the applause died down.

Was it good etiquette? I’ve no idea. And neither have I any about the half dozen elderly citizens who clapped after each movement at that Sunday morning concert I mentioned before. On that occasion, however, I felt inconvenienced. Maybe I should have worn my royal clothes, including crown and sceptre.