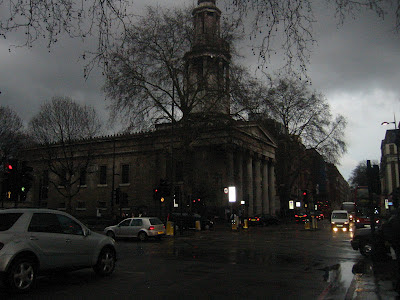 And now that May's rain has moved off, what am I left with? Memories, that's what. Both distant and recent. The latter are still found in the puddles children hop over when they run past the new Turkish restaurant on the high street. The one that also doubles up as a banqueting hall. Where, in the menu, Cs wiggle their tails until they become "Çs" and lower Gs don inverted hats and turn into "ğs".

The puddles also bring back distant memories of May's first rainfall and how we used to welcome it in Cuba. According to an old tradition, getting caught in the fifth month's first washout brought you good luck. As children we used to seek out the signs in the overcast, dark, granite sky. But most of the time all we found was yet more humidity.

Until one day when, all of a sudden, we were caught unawares.

Then, we all came out to play. In the pouring rain, we would all stay. Down wet, marble floors we would slide, on our bare bellies, moving from side to side. In yards and corridors we played hide'n'seek, whilst in a flat nearby the rain created a leak.

Those distant memories contrast with the spectacle before my eyes now. Two weeks ago, the high street was flooded. People weren't looking up to the skies, closing their eyes and letting the pouring rain glide down their faces. They were running away from it. And I was one of them. They were asking themselves "When will it stop raining?", not "This presages good luck".

We had hail, with stones so big that they could well have been used as a football by the local five-a-side that meets every Sunday near my house. We had so much thunder and lightning that I was led to believe that London had suddenly become the dominion of Shangó and Oyá, two of the more popular orishas in Cuba. I feared for plants and their diet. Their roots gorging on so much water. So many nutrients all at once. Would this endless rain cause an eating disorder epidemic amongst our shrubs?

But after the rain ended and the sun shone on my little London corner a thought assaulted me. Neither in the newly revamped shopping centre's marble floors, nor in building corridors nor in houses, had I seen children sliding on the floor on their bellies when the skies opened. And it suddenly occurred to me that in spite of May's first rainfall, or maybe because of it, all those years ago, I'd been a lucky boy indeed. Very lucky.

Next Post: “Sunday Mornings: Coffee, Reflections and Music”, to be published on Sunday 10th June at 10am (GMT)
Posted by A Cuban In London at 23:59