Living in a Bilingual World (The One About the Queen's English)

Language is a funny thing. Just imagine, we're 7 billion souls in the world today and if I was to write this post in Spanish, more than three quarters of my regular readers wouldn't understand it. Similarly, if some of you opted to communicate in vernacular Scottish or Punjabi slang, I would be floored. It just goes to show what a diverse bunch we, humans, are.

That's why we've always tended to simplify words, phrases and sentences. Create linguistic shortcuts, if you like. Looking for a common denominator, a template to which we can default in order to communicate better with each other. Languages don't just exist as tools to get our message across, but also as canvasses on which we experiment and give free rein to our imagination. The first time I heard a conversation between a London-born Asian guy (of Indian ancestry) and a Jamaican patois-speaking black man. I was clueless about what they were saying but spellbound by the musicality of their lexicon. Later on I found out that the Asian guy had adopted rhythmic linguistic patterns from his interlocutor's Jamaican lilt, whilst his counterpart had done a similar thing but in an Asian style.

All this probably explains why, faced with an ever-expanding globalised world, groups like the Queen's English Society are destined to fail. In the era of textspeak and 140-character-long speeches, not a lot of people care about the difference between "refute" and "rebut". 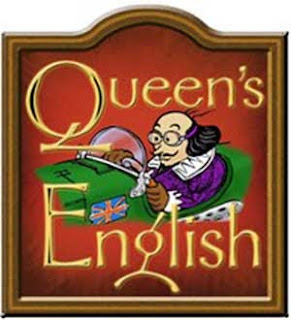 I pity the QES, because I'm also a stickler for good grammar and syntax. I don't mind neologisms and modern-day slang, as long as the speaker knows how to use proper language. "Proper" in this context shouldn't be confused with the snobbish attitude that some people display towards those they think inferior just because they use different words or phrases, or have a different accent. I mean it in the sense of having the capacity to communicate in a way that most people will understand you. I welcome English's all-inclusive approach to importing words and phrases from other languages. But I also think that we're letting the next generation down when we don't tell them that they shouldn't say "Peter is more intelligent then Paul". That's what I call bad English, or bad language.

However, I think that the Queen's English Society shot itself in the foot when they came up with their name, even if it was forty years ago. I mean, Queen's English? Really? At a time when on BBC Breakfast News, Middlesbrough-born, business reporter Stephanie McGovern's melodic northern accent is a welcome wake-up call for this blogger at ten to seven every morning? And she even mixes it with Irish dancing? Really, Queen's English? Forty years ago they should have seen that the game was up when the 60s introduced us to swinging London.

Language exists in a constant state of motion, changing and moving forward like the society around which it develops. Most languages carry with them subtleties and nuances that render them elegant, regardless of whether this amounts to no more than the word "blatant" uttered by am Asian young man to emphasise an idea. To pick on certain dialects or forms of speech, like the Queen's English Society used to do, smacks of snobbery.

Moreover, what I've found as a non-native speaker is that English is by its very nature subversive and so are its users. I don't believe that in a country like the UK, someone would come up with a body like the Academia Real de la Lengua Española to act as a judge and adjudicate on all matters linguistic.

This dogmatic approach to language displayed by the QES has also infitrated other sections of society. If not, look at the recent outcry by the Church of England about government plans to change the law and enable gay couples to marry. You could be forgiven for thinking that the Armageddon had arrived. Just because the definition of marriage as the union of two persons of opposite gender is deeply embedded in the English language doesn't mean that in this time and age we have to follow the same linguistic rule to the letter. To me, the motive of the Anglican church is clear: they want to claim ownership of the legal definiton of human relationships. But with an ever dwindling membership, can the Church really afford to be so blind? Even followers of its faith have expressed support for the changes. We already have civil partnerships, why not go the extra mile and grant gay unions the right to marry, too?

As I mentioned at the beginning of this post, we're a diverse bunch. And as it sadly happened to the Queen's English Society, those who fail to adapt to the demands of modern living, including the way we speak now, fall by the wayside. I'm not saying that the same fate awaits the Church of England, but as everyone knows God moves in mysterious ways.


Next Post: “Sunday Mornings: Coffee, Reflections and Music”, to be published on Sunday 1st July at 10am (GMT)
Posted by A Cuban In London at 23:59