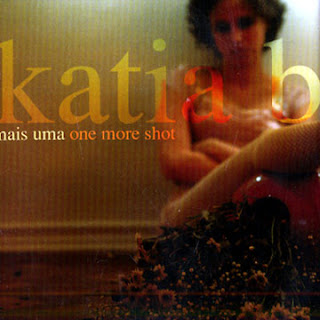 Lounge music is sadly one of those genres that is very rarely accorded its own value. At best, it is thought mainly as mere background music for dinner parties, at worst it's often likened to muzak. It doesn't help either that there's a whole industry built on manipulating listeneres' emotions and that a lot of melodies emanating from it are rubbish. Yet, there're also many artists under the lounge music umbrella who are very talented and whose work we ought to highlight.

One of those is Brazilian singer Katia B, whose album Mais Uma/One More Shot has been playing on a loop on Killer Opening Songs' stereo. If you're looking for a cool chill-out record with plenty of soul and no lack of meaning, this is it. Mais Uma has a soft and funky groove that runs through each and every song, making the record grow on the listener slowly but surely. One of the main reasons for this is Killer Opening Song, Só Deixo Meu Coração Na Mão de Quem Pode.

When K.O.S. was younger it heard people saying that French was the language of romance, but what they forgot to add was that Portuguese was the language of sensuality. Katia's voice exudes passion and suggestiveness partout and the result is a synergy between singer, backing band and listener, savouring every intimate nuance. This is how musical infidelity starts. You suddently catch yourself cold-shouldering your battered copy of Bebel Gilberto's Tanto Tempo and nipping downstairs with Mais Uma/One More Shot tucked inside your tweed jacket, the new kid in town. Or should K.O.S. say, the new girl in town.

Katia B defies categorisation, another reason to ignore platitudinous comments on lounge or chill-out music. Six producers are credited in her record and their ifluence is obvious. Her style ranges from furious up-tempo trip-hop, Tanto Faz Para o Amor, to laid-back piano-driven ballad Are You Sleeping?

As spring is almost here and car windows are rolled down for the first time this year, Killer Opening Songs strongly recommends this album. Whether you are heading for your first family picnic or relaxing in your back garden, this record's gentle bossa nova guitar and bold soundscape is a surefire winner.

Next Post: “Exercises on Free Writing”, to be published on Sunday 18th March at 10am (GMT)