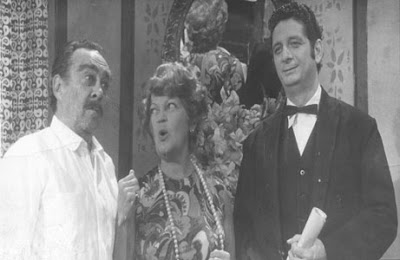 Back in the day when I was a child in Cuba, there used to be a television programme called San Nicolás del Peladero. The eponymous town at the centre of the sketch show was the fictional setting for the run-ins and tiffs between politicians from – at the time, probably late 1940s, early 50s – Cuba’s two main parties: the Conservatives and the Liberals. In addition to the government legislators, there were also characters deeply rooted in Cuba’s rich theatrical tradition: the mulatto woman, “el gallego” (literally, Galician, as that was the appellation given to most Spaniards who arrived in Cuba at the turn of the 20th century), the bent copper, the tough guy (accompanied by his inseparable knife) and the fashionable aristocrat. The programme launched the career of many actors and actress, whilst it developed the skills and craft of others.

Although the aim was to entertain, San Nicolás del Peladero always had an ulterior motive, and it made no secret of it: deep down inside, the message was, Conservatives and Liberals were the same. The two parties that dominated Cuban politics for half a century until the arrival of Fidel and his band of merry, bearded men in Havana, could hardly been told apart. Thus, I grew up with the idea that being a Liberal wasn’t so dissimilar to being a toff.

Yet, there was always a niggling feeling inside me that grew louder after I moved to the UK. I could, and in the end, did accept the “liberal” tag, but “Conservative”, even with a small “c”? No. That would have been a tad bit too much.

They say that as you get older you start developing a more traditional and old-fashioned view of the world. Whereas before your vocabulary was peppered with words such as: evolution (and revolution!), progress and reform, now you feel more comfortable in the realm of terms such as preservation and restoration.

To which I say, where’s the harm in that? After my first decade in London I eventually realised that I was growing a conservative streak, albeit not one of a political nature.

No, my conservatism was rooted more on the original meaning of the Latin word "conservare" (to preserve). It was more related to the maintenance of some traditional attitudes than to an outright support for the status quo.

For instance, I’ve always believed that manners matter in society. How you treat others is just as important as, or, occasionally, more important than the clothes you wear or the car you drive. Opening doors for women, giving your seat up on public transport for someone who needs it more than you do, saying “good morning/afternoon/evening” or “hello” when you run into someone; these were the norms with which I was brought up. It brings out the curmudgeon in me when people try to make a causal link between boorish behaviour nowadays and the attention span deficit brought about by modern technology.

If exposure to bad manners makes me sound like a "Mr Disgruntled from Tunbridge Wells" on the pages of The Daily Telegraph, reckless government decisions lay bare my inner Eustace Tilley, The New Yorker’s long-standing front cover dandy. Take for example the plans earlier this year to sell off England's public forests. The sale would have expected to raise in excess of £150m over a ten-year period. The problem was that the leases being considered for tender were under what's known as "heritage sites" or "heritage forests", in short, woodland that has a very high conservation and recreation value. The government proposals were so ill-thought that opposition against them brought together groups that wouldn't normally be found consorting together like for instance, the Countryside Alliance (pro-hunting) and the Stop the War movement (self-explanatory, really). When it comes to defending the right to walk at one's leisure through one of the many wonderful woods that this nation can proudly boast about, especially on an autumn day, it seems that there's no left or right, but just "conservare".

Another issue where tradition gets the better of me is shopping centres and supermarkets. When I speak to people born and bred in the UK, they can't believe how fast the retail landscape has changed in the last twenty-odd years. The little cornershop, the local fishmonger's, grocer's and butcher's with their misplaced apostrophes. They have all given way to the Tescos, Sainsbury's and Asdas. They have been wiped out to make space for Westfield-style shopping centres in our brand-new, outside-the-box-thinking, cool Britannia. Never mind that with this new architectural approach (some would call it "onslaught") the soul of local communities has been gouged and hundreds, if not thousands, years of history erased. No, what's important is that hideous buildings like the Shard become the vision of the future in this country. Me, I'm happy with the two-up, two-down, red-tiled, standard British house and all its varieties. Keep London and Britain, by default, low-rise. We don't need Manhattan-style skyscrapers, m'lud.

As a forward-thinking and progressive person, I welcome the changes that have resulted in a social and racial melting pot in the UK. I belong to it. I have contributed to it. But I also love this nation's rich heritage. I enjoy walking through its forests, learning about its traditions and visiting its old estates. And no, that doesn't make me a Tory-supporting, wannabe-fox-hunter. It makes me an advocate for the values and morals that underpin our culture and history. I'm sure that even Plutarco, the maire in San Nicolás del Peladero, would agree with that.