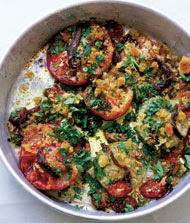 September is the twilight month when summer slowly evolves into autumn. Temperatures still hover in the early 20s (Celsius) but already the morning air carries a nippy, crisp and metallic feel. Perfect time, then, for another Nigel Slater's recipe:

ROAST TOMATOES WITH CRUMBS AND THYME

Set the oven at 180C/gas mark 4. Slice the tomatoes in half and lay them cut-side up in a shallow baking dish or roasting tin. Remove the thyme leaves from their stems and put them in a small mixing bowl with 80ml of olive oil. Peel and finely crush the garlic cloves and stir into the olive oil with a generous grinding of sea salt and black pepper.

Stir the breadcrumbs into the oil with the anchovy fillets, roughly chopped. Spoon over the tomatoes and bake for 40 minutes or until the tomatoes are tender and the crumbs lightly crisp.

Some of the melodies that could well accompany this dish also carry that nostalgic feel that autumn so naturally conveys.

Georgia Anne Muldrow's free-spirited approach to music is most welcome and on this track, "Roses", you can appreaciate her wide vocal range, going from a smoky, jazzy timbre to a more old-school R'n'B beat. Beautiful.

Yellow is the colour of the leaves falling from the trees in autumn (and orange, red and so on). Yellow is also the colour of Joni Mitchell's famous big taxi. The one that took her old man away and left her ruminating about how "Don't it always seem to go that you don't know what you've got ‘til it's gone". Timeless.

Jazz is famous for its intros. Brubeck's "Take Five", Davies' "So What" and Alice Coltrane's "Turiya & Ramakrishna" to name but three. But my top favourite (at least for the time being) has to be Oscar Peterson and Ben Webster's "Poutin". The timing is just perfect and the synergy between the four musicians is incredible. It's like the peeling, crushing and stirring involved in tonight's recipe. No matter what the vehicle is (nose, eyes and mouth for the food, ear for the music) the destination is the same: the soul.

Next Post: "Sunday Mornings: Coffee, Reflections and Music", to be published on Sunday 18th September at 10am (GMT)

Photograph: Jonathan Lovekin for the Observer.
Posted by A Cuban In London at 23:59