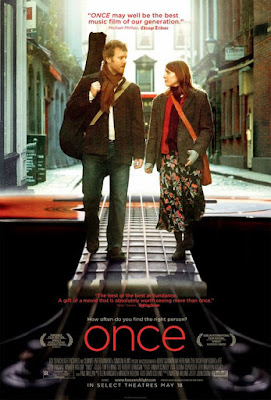 Most of the films I’ve reviewed so far in this space have been either movies I’d already seen and wanted to enjoy again, or famous titles I couldn’t watch at the cinema at the time of their release. Since I am a member of Love Film, a UK-based DVD rental company, I take full advantage of their vast and eclectic collection and Sunday nights have become for my wife and me our weekly rendezvous with the world of cinemascope.

Occasionally, though, I choose randomly a movie I’ve never heard of. The motivation can based on the DVD’s cover design, or the synopsis, or the genre in which it is included, whatever the reason is, the process is totally unpremeditated and the result is often satisfactory. That was the case with ‘Once

This modern-day musical tells the story of a busker on the streets of Dublin, Ireland. One day, a Czech girl stops to listen to him and, impressed by the emotional frankness of his compositions, tries to find out more about his music and what spurs him to write it. It turns out the street performer (at no point is he or the woman given names) helps his dad repair vacuum cleaners, though his heart is set on becoming a recording musician. By happenstance the Czech’s Hoover is faulty and this gives her the perfect excuse to create a bond with the busker. She also has a musical background of her own; she plays the piano and writes songs. Romance blossoms but dangers lie ahead. The Irish lad is attempting to recover from a break-up with his long-term girlfriend who’s upped sticks and moved to London. For the Czech woman the situation is even more complicated; she is raising a young daughter in Ireland and her husband is trying to join them both.

‘Once’ is one of those movies that leaves the viewer with a spring in their step. Told through the power of music, it unites two people whose personal circumstances are poles apart. The man still lives at home with his father and although he finds it hard to make ends meet, his situation is very different from the Czech woman. She is an immigrant, doing odd jobs here and there (at one point she works as a florist), living at home with her mother and daughter, in a squalid flat where there’s no telephone and everyone has to share one bedroom. Every evening a group of lads come down to her apartment to watch telly since hers is the only one in the building. Money is tight, not to say almost non-existent. Yet, she doesn’t let this situation bring her down. She usually sports a wide grin on her face and becomes the driving force in the busker’s musical enterprise. It’s thanks to her efforts that the musician puts a demo together in the hope of getting a contract.

The script is excellent. I loved its nuances and subtleties. In a move that I imagine might have been a bit awkward with the film’s backers, the writer/director John Carney refuses to let the romance follow its natural course. And to me that’s one of the reasons why ‘Once’ pull its weight way above the current crop of Jennifer Anistonesque rom-coms: the movie is unpredictable. What the director gives us instead is the power of friendship, the gradations of love. In this endeavour he is helped by the superb performances of both Glen Hansard, frontman of the band ‘Frames’ (coincidentally the director John Carney used to play bass in the same group), in the busker’s role and Markéta Irglová as the Czech woman. The latter, especially, displays such a natural, organic thespian knack that it’s hard to believe she was only nineteen when the movie was released. Script and acting are supported throughout the film by a great soundtrack where tracks ‘Falling Slowly’ and ‘The Hill’ blend magnificently with the grey Dublin landscape.

In the end the busker shoots off to London in an attempt to re-build his life with his ex-girlfriend. Meanwhile the Czech woman has just received news from her husband that he will finally be joining her and their daughter soon. The final shot is an ode to hope, love and above all friendship.