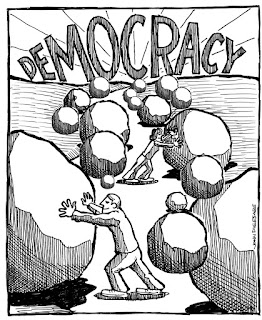 At the time of writing this post I’ve yet to cast my vote in the UK general election. By the time you read this column, though, we might have a new prime minister. Or maybe a hung parliament. And if it’s the latter, it’d better be well hung, what with the lack of female politicians on the campaign trail, if your poison of choice is testosterone, it’d better stick out from the beginning so that it can rise to the occasion. And yes, all puns are intended.

Or maybe the hung parliament will hang so low that its fate will go the same way as Ellis Drummond, the teenager from Rushden, whose asbo (Antisocial Behaviour Order) prevented him from ‘wearing trousers so low beneath the waistline that members of the public are able to see your underwear’. Taking into account that David Cameron’s Big Society idea was just pants, an asbo on an incoming parliament wouldn’t be out of place.

But before today's Sunday outing becomes an unabashed version of a ‘Carry On’ film, let me come clear. I have fond memories of the 1997 general election. Why? Because I had just visited Britain for the first time in April that year and my flight back to Havana took off a couple of days after Labour’s historical landslide in early May.

During that month I remember enthusiasm, effervescence and a sense of confidence in the future. The famous British upper lip was nowhere to be found, at least in London. When I rode the tube I overheard people talking about getting rid of the Tories and how Tony Blair was going to fix the country.

We all know what happened after, however. What started off as overenthusiastic praise for the White House and the 'special relationship' (why is there never a Relate counsellor available when you desperately need one?), ended up with a full-time membership of Vatican PLC.

And yet, this type of two-faced politics never put me off voting. I voted even when I wasn't supposed to (in 2001 I was sent a ballot paper by mistake). I've stated my political sentiments with an 'X' four times in the course of twelve and a half years (I include the London mayoral elections, too). What's moved me to vote? Here are a few reasons.

I vote because I owe it to my fellow Cuban compatriots who don't have the opportunity of changing the government themselves when and how they see fit.

I vote because it's part of the process of adapting to a country with the oldest parliamentary structure in the world. Perfect, it isn't and neither would I like it to be. But it works most of the time.

When I vote I am mindful of the three following elements: what is important to me socially, politically and economically - that is, my beliefs -, what's likely to happen (I call it reality check) and how I feel about the result. The latter is fundamental. It's what makes some people despondent about the whole electoral system and others optimistic. In my case and putting my pragmatic hat on, my vote has made a difference. It has ensured that the SureStart programme continues to support less well-off families, it got rid of the shameful Section 28 (enacted by the Thatcher government and aimed at eliminating the mention and teaching of homosexuality in schools), it brought the minimum wage, the Freedom of Information Act (which in a subtle touch of irony is being undermined by the same government that introduced it. Who said that slapstick comedy was dead?), regeneration programmes that tackled housing and unemployment. But my vote has done a lot of damage, too. It gave us the invasion of Iraq, political spin as a substitute for substance and the erosion of civil liberties. And let's not forget those MPs milking the system.

So, voting is not easy. It is an arduous task and one that I've never underestimated. Of course, you could say that there's another way. And indeed there is: abstention.

I look up to people who opt out. And my appreciation is once again rooted in my background. Abstaining from voting in Cuba is a no-no. I once met a man who spent a couple of years in jail for leaving his ballot paper blank. Don’t ask how the officials knew that he had not voted. It’s common knowledge that elections are rigged in Cuba. Over here, though, people who write ‘None of the above’ are making a statement against political sleaze. And sometimes we need strong assertions like that. My only concern comes with the degree of responsibility the abstainers assume. Or the lack of it thereof. Because let’s be clear about one thing, even when you don’t turn up to vote, you’re still voting. I know it’s a contradiction but the truth is that someone will be elected. And that someone (MP, councillor, Prime Minister) might be worse than the option against you were fighting. If it’s a member of the Monster Raving Loony Party we might be in for a good laugh. But what if it’s the BNP or Ukip, or any other racist political outlet? How do I explain to my children that the jackboot that left a mark on my face was the consequence not just of lack of faith in a flawed political system, but also apathy?

That’s why I vote. Because it’s difficult, messy, complex and sometimes unpredictable. At the time of writing, the Best Newcomer Act award in the UK general election goes to Nick Clegg, the leader of the Liberal Democrats. Whilst in pole position for the ‘Went Out to Get Some Bread and Bagged Me a Prime Minister Instead’ award goes to Gillian Duffy from Rochdale, otherwise known as ‘Bigoted Woman’.

But that’s enough thinking for today. After all, it’s Sunday, and right now the fire in my belly can only be put out by a good old bass hook. Over to you, Suzanne!