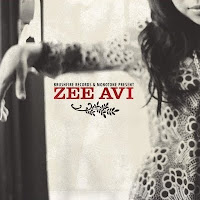 A five-star review of a recent concert in the local newspaper, an interview with the singer where she waxed lyrical on her sources of inspiration and that feeling of 'easy like Sunday morning' that casts a spell on holiday-makers, were the only reasons Killer Opening Songs needed to make his way to the nearest shopping centre in Kuala Lumpur and buy Zee Avi's debut album 'Zee Avi'.

Lured by the sound of her voice when the shop assistant played the CD in the music store, it took Our Regular Rendezvous with Introductory Tracks with Homicidal Tendencies just one nanosecond to decide that this record would have to be added to his music collection.

A sleeper hit that has been making inroads and garnering plaudits since its release last year (and hopefully this post will contribute to raising awareness of the existence of such a beauty), 'Zee Avi' showcases the songwriting prowess of this twenty-four-year-old who hails from the island of Borneo, eastwards of Malaysia.

And at the heart of this success is the Killer Opening Song: 'Bitterheart'. K.O.S. confesses to having missed the core message of the track and only 'got' it when he put it on his mp3 player recently. By which time, he'd already decided to give it a slot on his blog.

Upbeat tempo, refreshing voice and perkiness. Not the combination of words and phrases that comes to mind when you think of songs about disappointment, disillusion and let-downs. And as if to confuse the listener even more the first four lines promise a bright start: 'Sun rays come down/as seen when they hit the ground/Children spinning around/Til’ they fall down down down'. But then we're faced with the real dilemma: 'I wait for you/It’s been two hours now/and you’re still somewhere in town/your dinner’s getting cold'. Oh dear.

'Bitterheart' is that type of composition whose brevity belies its intensity. At just over two and a half minutes long, it's one of the sweetest tongue-lashings K.O.S. has ever heard; a sharp contrast to Kelis's 'Caught Out There' for sure. The track mixes angst with self-containment ('Bitter heart, bitter heart/tries to keep it all inside') and there's even a semi-ultimatum at the end ('so tell me what’s her name').

'Bitterheart' is also the open sesame of a cluster of mesmerising melodies that will have you humming them for days on end. On this very space, we've already had 'Honeybee', a song that manages to be defiant and romantic at the same time. 'Poppy' is a sad, jazzy tune about the effects of heroine on a loved one ('My baby he don’t act like himself no more/he lost that smile I used to adore/he spent his nights slapping his veins/he lost that glow he used to have in his face'). 'Kantoi' is a ukelele-driven track sung in both Malay and English that tells an amusing modern story of deception. And although Killer Opening Songs is not a big fan of The Smiths or its frontman, Morrissey, Zee Avi's cover of 'First of the Gang' is superb. Pared down to the bare minimum acoustic accompaniment, a guitar in her case, the song had K.O.S. repeating the last lines long after it'd finished: 'And he stole from the rich and the poor/ and the not-very-rich and the very poor/and he stole all hearts away/he stole all hearts away/he stole all hearts away/he stole all hearts away '.