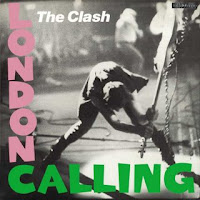 Was 'London Calling' one of the first eco-conscious songs ever? With its talk of 'The ice age is coming, the sun is zooming in/Meltdown expected, the wheat is growing thin', you could be forgiven for thinking that the mythical The Clash were trying to soundtrack Al Gore's controversial documentary 'An Inconvenient Truth', twenty-seven years before the erstwhile US vice-president set his eyes on the environment.

Or, alternatively you could think that the British band's prescient commentary on climate change was one of its many virtues. After all, The Clash were no ordinary punk outfit.

If truth be told, Killer Opening Songs is the first one to admit that punk did not register highly on his musical radar when he was an adolescent. And neither did it on most of his peers'. Hard, bluesy rock, heavy metal and prog-rock were the staple diet of a section of the Cuban youth of the 80s. Still, a handful of 'friquis' sported mohawks, which identified them as fans of punk. Let us say, also, for the sake of veracity, that, sadly, these Sex Pistols enthusiasts did not go down well at all with the police, resulting in them getting acquainted rather intimately with prison cells.

But back to The Clash and its formidable output. Unlike other punk bands whose approach to music was more DIY, The Clash was made up of very talented musicians: lead vocals and rhythm guitarist Joe Strummer (né John Graham Mellor), lead guitarist and vocals Mick Jones, bass guitarist and vocals Paul Simonon and drummer and percussionist Topper Headon. Also, in contrast with other punk bands, The Clash pursued a more experimental sound based on ska, funk and reggae. Their lyrics, too, were not as anarchic as those by other punk outfits and they carried a heavier dose of idealism mixed with a strong social message. A good example is the Killer Opening Song of their 1979 album 'London Calling', and title track. Using the BBC World Service's station identification as an iterative tool, Strummer delivers a portentous - and what has become in recent years -, timely tale of the effects of what could be 'a nuclear error'. Blended into the song are also references to violence, drugs and punk's fading star.

Though the music is compact and the band sounds pretty tight on this K.O.S., it is Topper Headon who stands out from the outset. The ominous feel is magnified through his military drumming, thus, creating an atmosphere of doom and catastrophe.

Who knows? Maybe Al Gore was tuning in at the time.

Next Post: 'Sunday Mornings: Coffee, Reflections and Music', to be published on Sunday 31st January at 10am (GMT)
Posted by A Cuban In London at 23:59