More About the Song (Review) 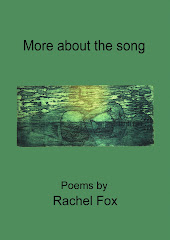 A curious thing happened recently. I opened an envelope containing 'More about the song', a poetry book by fellow blogger and poet Rachel Fox and it was the back cover that greeted me first, with the following caption:

Does a blurb ever lie?
Can it tell what’s inside?
Go on, open me up
I have nothing to hide

And with that playful invitation I wasted no time and began to read her book back to front. And if this sounds unusual it is because Rachel’s poetry is also unusual. The only way I can describe it is as a lively, jumpy, animate creature that entertains the reader whilst making him/her think at the same time. Take this poem from the section called ‘Keeping On – Pluses and Minuses’:

Don’t explain to me how music works
Leave me the mystery, the miracle
The same for tides, keep it to yourself
All the sensible science, the hows and whys
Don’t dissect the perfect line of words
With an ‘obviously the writer knew what they were doing’
Says who? Why? How? Are you sure?
You are so neat, methodical
And you have a lot of boxes
I have a little order, much overspill
And no lids anywhere in the house
It’s messy here, a mass of mysteries
But the dreams that come this way
They are limitless
They last forever

What appeals to me the most in this poem is Rachel's Peter Panish tone. Like her, sometimes I can't stand 'The Making Of...' that so many movies and music videos seem to come attached with nowadays. I want to enjoy the mystery, the 'is it? is it not?' innocent quality of the naked (metaphorically speaking, I hasten to add) spectator. And it is the last three lines that do it for me: 'But the dreams that come this way/They are limitless/They last forever'. It's a quality that is in short supply, this dreaming, this 'sometimes not wanting to know how'.

The other aspect of Fox's poetry I found rewarding was her pragmatism. For instance in 'Situations Vacant' from the aforementioned section, she addresses those people who moan all the time about their job whilst at the same time counselling patience before choosing one's employment.

All work has its price
Its needs and its downfalls
It drains us all dry
And it sees us get old
So choose your way wisely
Pick something you’re fit for
Space exploration?
Leave that to the bold

Certain poems struck a very personal chord with me. For instance, 'To Fade', from the section called 'Going round - Living for beginners', brought to mind how I told my daughter off some weeks ago for whistling whilst I was trying to listen to some music in the kitchen. I immediately and quietly berated myself for impinging on her territory, especially when one takes into account that not many people whistle anymore. Later on that night I read Rachel's poem again and thought to myself, 'I hope she never fades'. Luckily, she hasn't, her whistling has got stronger.

And I wonder when does it stop
The joyous twittering?
When angry playground voices shout
‘Shut up stupid’?

Or do we censor ourselves slowly?
‘Time to turn it down now‘
‘Time to go inside’ and finally
‘Time to face the music’

Above all, 'More about the song' is a musical book as befits its title. The language, cadence and rhythm, they all point at a melodic infrastructure that allows Rachel's poetry to bend the rules (if any) as her poem 'The song remains' avers:

'Lie back
Relax
Let the words flow
Just so
Keep your rules
And tightening tools
For prose
And let it go...'

It should not come as a surprise that Fox performs her poetry, too. And as the clip below shows, she is also pretty good at it.

I would like to thank Rachel for giving me the opportunity to review her book. I would also like to let her know that with the help of her poetry postcards, I have indulged in little 'acts of rebellion'. Nothing major. I left 'Save the trees (or else)' inside a magazine about cars at my local Tesco. 'And so it goes' ended up in a copy of The Economist. As for me, I still wave my hand at the face and not the car. Many thanks.

Labels: A Cuban In London, Cubans in London, More about the song, poems, Poetry, Rachel Fox