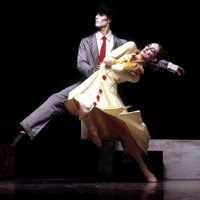 One of the aspects of dance that appeals to me the most is the opportunity it gives its practitioners to transform themselves into any object or person they want to be by merely using their bodies. Whilst this is also true of theatre on certain occasions, it is in dance and its emphasis on physical expression sans mots where one can best appreciate the body as a talking tool.

And Ballet Rambert is to me an apposite example.

Unlike my previous post about the famous troupe where I felt that the performance by Britain's 'premier contemporary dance company' (according to the programme notes) was under par, the matinee I attended with my wife and our two children a couple of weeks ago had everything you wanted from a dance spectacle, and still a bit more.

'Hush', the opening choregraphy of a two-piece programe, focused on a family of six: mum, dad and their four children during their night routine. The title hails from a famous lullaby that was included in a collaborative record by Bobby Mc Ferrin and the Japanese cellist Yo-yo Ma. The choreographer, Christopher Bruce, who was in charge of Ballet Rambert for eight years, sought inspiration for this piece on the album sleeve notes: 'Hush is a musical celebration of life - from youth to old age. While in so many ways this album speaks to children, it is equally true that perhaps its central goal, to use Bobby's (McFerrin) phrase is "to release the child in the adult"'. And it was this philosohy that underpinned the choreography. From the parents' struggle to juggle their responsibilities with their own 'me/us-time', to the children's nocturnal activies, this was a soul-warming piece. My favourite moment was the duet (at first, then turned into a trio) performed by the two brothers who were intent on catching a fly that had mysteriously sneaked into their bedroom. Bobby and Yo-Yo's infectious take on 'The Flight of the Bumblebee', had the audience enraptured whilst the skills and dexterity displayed by the two dancers on stage had us all on the edge of our seats, sweating profusely in admiration. After the two brothers chase the minuscule intruder for a long time they eventually give up, only for their younger sister to steal from behind them, jump up and bang! swallow the fly up in one gulp. Magical stuff indeed.

If 'Hush' rang true with many a parent in the audience (during the interval we all exchanged that kind of look that shouts out more than we can ever express with words) then the frantic razzmatazz that was 'A Linha Curva' (A Curved Line) was a welcome sight for those, like me, for whom sometimes dance is just about the pleasure of moving one's body until the last drop of sweat has been extracted. Twenty-eight dancers (including mum, dad and children from the first piece) filled up the stage at Sadlers Wells to give a fantastic demonstration of what happens when an Israeli choreographer travels to Brazil, comes back to work with a UK-based company and employs a Dutch quartet to play percussion. And if that is also a reflection of the multicultural city in which I live, I'm sure it was unintended, but I cannot have been the only member in the sell-out crowd who felt proud to live in such a wonderful city like London.

Twenty-eight rippling torsos, fifty-six muscled legs, twenty-eight rotating pelvises and twenty-eight mini-micro, little, lychra unisex pants in an assortment of bright colours with black gauzy tops. That was 'A Linha Curva'. It was the closest you could get to a version of the Rio carnival in the month of May bang in the middle of London. Shaking, stomping, jumping, swirling, pirouetting. This piece had it all. What was the 'message' behind it? None. Correction, there was a message. Dance is life, and life is to be lived, so, let's live our life, together and in full view, preferable whilst wearing hotpants. If 'Hush' left parents in the foyer winking at each other metaphorically, 'A Linha Curva' had us all line-dancing in our heads long after the curtains had come down.

I will leave you with two clips. The first one is the aforementioned piece, 'A Linha Curva'. The second one is Bobby McFerrin and Yo-Yo Ma singing 'Hush'. I could not find a good clip of the actual choreography but I'm sure the music will still leave you in the same high spirits as the dance piece left me. Many thanks. Enjoy.

Next post: 'Song for a Summer Sunday Morning' to be published on Sunday 7th June at 10am (GMT)