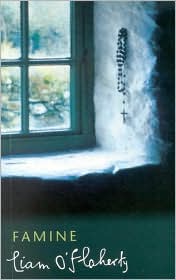 Níl aon suáilce gan a duáilce féin
There are no unmixed blessings in life.

It has been said that at the height of the great Irish Famine between 1845 and 1852 the population of that country was reduced by around 20 percent. Whilst the famine was caused mainly by a potato disease, there were also economic, social and political factors that played a major role in the tragedy.

It is against this grim backdrop that Liam O' Flaherty sets his novel 'Famine' that first saw the light in 1937. The book follows three generations of the Kilmartin family as they attempt to ride the wave of despair and desolation that surrounds them. Brian Kilmartin is the paterfamilias who keeps a strong hand on finances and the running of the household. His wife, Maggie, is the traditional Irish housewife armed with a stern character and a personality moulded on the hardships life has thrown at her. Martin Kilmartin is Brian and Maggie's elder son and who is also married to Mary (née Gleeson). Mary's own family tree occupies a prominent role in the novel. Her father, Barney Gleeson, is the local weaver. The Kilmartins also have another son, Michael, who unfortunately dies later on in the novel.

From the outset O' Flaherty sets the tone for the whole book: dark and thundering skies, dimly-lit interiors and embittered conversations full of rancour and bile between the dwellers of the Kilmartin house. The atmosphere is suffocating and oppressive. This is not the Ireland featured in 20th- and 21st-century tourist brochures with its green pastures and emerald landscapes. This is the Ireland of the potato blight, of English landlords often called 'absentee landlords' on account of them leaving their affairs behind to be managed by agents. Moreover, this is the Ireland of the plague and infanticide (there is a harrowing scene towards the end of the novel where a mother kills her three children in order to be arrested and thus ensure she is fed in jail).

The plot revolves around Brian Kilmartin and his clan, first doing his utmost to save his potato harvest, then ceding power to his son, Martin, and later from the latter to his wife, Mary, when Martin has to flee to the mountains after he is wrongly accused of murdering the English landlord, Mr Chadwick.

Liam's style is descriptive and journalistic, the latter can be seen more specifically in the passages where he uses historical references as a backdrop for a particular scene. The novel's rhythm is fast-paced with short words and sentences. There is not much introspection, with most of the action happening externally. And as befits a novel set in Ireland the majority of his characters are devotedly pious. This religious aspect gives him plenty of room in which to depict the battle between the Catholic and Protestant faiths, an element that underpins most of the novel and that acts as one of the catalysts in the decision to get rid of the English administrator towards the end of the book.

My only criticism of this superb novel is that Liam O' Flaherty falls into clichés sometimes. The English agent, Mr Chadwick, is a good case study to illustrate my point. He is evil to the point of caricature and although there might have been many Mr Chadwicks during this terrible time in Ireland, sadistic men who gloried in their own power and exerted it without second thoughts, a more rounded personality would have made him more believable, at least for me.

This comment, however, should not detract the future reader from the fact that this is a magnificent book with a very strong narrative and an ending that (please, look away now if you are thinking of reading it because a spoiler is about to appear) is as happy as one can imagine in the dire circumstances in which the novel takes place. Mary Kilmartin gives birth to a baby boy at the height of the potato blight. With all around her decaying and people dying she embarks on a ship to the US clandestinely after Martin arranges her, their son and his passage. So, there's a happy ending after all. There are no unmixed blessings in life as the old proverb goes but for Mary and Martin life proves to be the blessing they rightly deserved.

Note: This review is the first of a few post with an Irish theme in them. I know that St Patrick's Day was a week ago but this blog operates in its own time and pace, as you all know. My usual column 'Living in a Bilingual World' will have an Irish flavour this week and the Sunday section 'Song for a Spring Sunday Morning' will feature my latest musical discovery from the Emerald Isle. Many thanks.