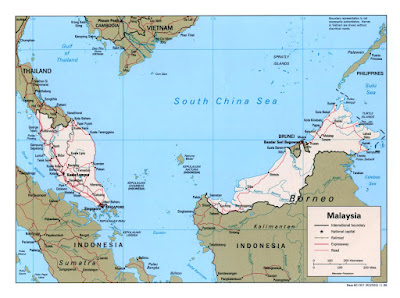 Whilst in Malaysia recently I, alongside my wife and children, was driven everywhere by my brother in law and his wife. And it was a pleasure to see the city unveiling itself before my eyes from the passenger seat. Coupled with my hosts' dexterity behind the wheel and their ability to mix explanations about the history and social make-up of Kuala Lumpu and the country as a whole whilst keeping an eye on the road, the feeling was of pure joy. And dexterity is a must-have trait when driving on the streets of KL. As I commented on the Living in a Bilingual World column a couple of weeks ago, drivers there cut in in front of you at the last moment leaving you with either wet knickers or a red, angry face. Or both. Luckily there were no near-misses and as both my brother in law and his wife conveyed to me people are so used to driving in that crazy way that no one thinks much of it. Add to this the fact that the police seem to turn a blind eye on most traffic violations and you could have a recipe for disaster. But it seemed to me at the time that most people knew the ingredients to the recipe and nobody wanted to put them together. The motto could well have been 'live and let live'.

This put me in a pensive mood as it usually happens when I'm thinking of themes for this column. For starters, even if we were able to hire a car in KL or a similar city with such a crazy traffic system (my darling Havana comes to mind), would I risk driving there when I am so used to laws and regulations in London? And secondly, if I did end up by driving in that city, would I try to abide by the laws governing the traffic, or would I copy the locals?
Same with music. We get used to so many different rhythms when we are growing up that it is hard to pinpoint what will be our genre of choice by the time we hit our teens. I still can't believe that with a father who worked and still works as a pianist and whose main remit was Cuban traditional music and a mother who knows her 'boleros' from her 'guarachas' I became a rock fan. But yes, that's what happened. When I turned 13 I became hooked on rock'n'roll. Little outside this music interested me and except for some 'Nueva Trova' and 'Novísima Trova' singers and musicians, I was a firm follower of Anglo-Saxon rock with the later addendum of the Latin American version.
It was very strange then that as my college years moved towards its twilight, I suddenly found myself one day at the 'Casa de la Cultura de Plaza' in Vedado attending the International Havana Jazz Festival for the first time. I had gone reluctantly; my mate had talked me into it. It was the place where I first saw Irakere live (after having slagged them off for the most part of a decade) and they blew me away on the night. But really, nothing prepared me for the musician who brought tears to my 17-year-old eyes, Arturo Sandoval. This was 1989 and as most Cubans know he would leave for the US the next year never to return to the island, but when he played his trumpet that evening, I understood for the first time what people said about spring, blossoms, flowers, renewal and revival. For me it was an opening, a secret door that let me through to another space and dimension, one which I had been ignoring for a long time on account of my stubbornness and which I had now decided to shed.
So, risks, there you have it. Some are worth it. Some are not. In my case, most of them, musically speaking, have worked. The other day as I was driving to the supermarket, making sure that the car was still up to scratch after having been left on its own for a couple of weeks whilst we were on holidays, I was listening to Aziza Mustafa Zadeh's album 'Dance of Fire'. It was just a short trip to the supermarket, but I was able to squeeze in the first three songs, 'Boomerang', 'Dance of Fire' and 'Sheherezadeh'. The combination of the warm spring sun streaming in through the window and the delicacy with which this Azerbi pianist slides her fingers on the black and white keys made me feel just like that day when I listened to Cuba's foremost trumpeter, Arturo Sandoval. And just like on that day a nice, big grin appeared on my face.