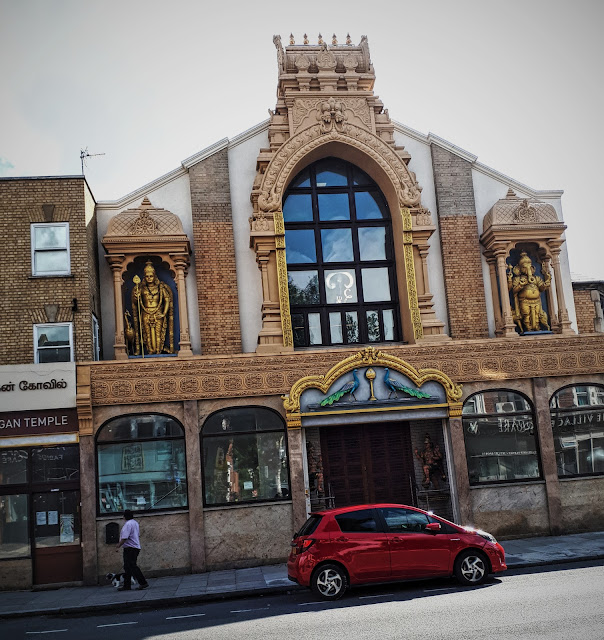 The mood the morning after the night before is subdued. Unlike last week when we had overexcited zombies instead of riders (many of the children stayed up late to watch England beat Germany in the semi-final of the Euros), this time my co-instructor and I are greeted by a sea of disappointed faces.

England lost again. On penalties. Against a team that didn’t deserve to win (sorry, Italy fans, but your eleven was totally uninspiring). To make matters worse, the racists were out in force again. Plus ça change, plus la même chose.

The only consolation was that the kids managed to concentrate more.

Anelderly man passes us on Mountfield Road riding a Brompton. He’s smartly dressed, even though it’s all bright cycling gear. Colourwise, the effect is more David Hockney’s “California period” than the muted grey of London’s N3 he could have blended in with.

Banter ensues. He also did some cycling training “in my time”. He leaves me savouring that phrase, “in my time”. Continuity. He must be pushing seventy, I gather. I turn back to face the kids and carry on explaining the importance of L-shaping your way around a junction when turning in or turning out.

I’m still of the opinion that children start in school too early in the UK. This reflects itself on a pattern of low-level disruption in later years. If a Year 5 or 6 child is asked to focus on a task on the road, this requires a certain level of maturity, responsibility and independence. If they’re still transitioning from a “play” stage to a formal “this is how you hold your pencil” one between Reception and Year 2, you can bet your bottom dollar that some will be left behind. These are the ones still “catching up” when they get to the top end of primary school.

I think that if children started writing and doing phonics at age seven or eight instead of five or six, they’d have more time to play and understand the importance of play not just at their age but throughout their lives. Picking up a pencil in order to draw squiggles on a piece of paper when they’re still too young should take a back seat to getting their hands dirty while mucking about with other kids.

When the roads are deceitfully quiet as they are today, children suddenly acquire a sense of false confidence. For a cycling instructor this situation might be manna from heaven (no grumpy drivers to deal with, for starters!), but in reality you want some challenging traffic your young charges will have to deal with.

When I told children today that we’d ordered a fleet of vehicles to travel up and down the roads where they were going to do their drills if traffic calmed down too much, some believed me. Some people might think this cruel, but to me it denotes the importance of keeping an innocent mind for as long as possible.

After Sunday’s evening thunderstorms, Monday morning feels as fresh as if the world’s been made anew. Last night the tap-tap-tapping on my window sounded as if nature was weeping on us in biblical proportions. Quite apposite, I thought, as Glasgow gets ready to host the 2021 United Nations Climate Change Conference in the autumn.

Every time I hear a church tolling its bells (I’m sure it was the one in Crouch End this time), I’m reminded of the Catholic church near which I grew up in Havana. Did its bells ever toll? I can’t remember now. I think it unlikely, though. What with Fidel’s well-known approach to Christianity. There was no other God but him.

Early morning and I’m waiting for a trainee in Lordship Rec, Tottenham, north London. Two dozen crows descend upon the four or five light green refuse bags that crowd around one of the bins outside the Hub, the volunteer-run café. Like a scene from a Hitchcock film, the birds apply themselves to ripping the bags with their pickaxe beaks with strong determination and fervour, trying to get at whatever they can find inside.

Metallica’s The Call of Ktulu appears in my head all of a sudden as the soundtrack to the spectacle unfolding before my eyes. As Hetfield and Hammett move up the scales, the corvids’ feeding frenzy increases, interrupted occasionally by the odd runner, walker, pram-pushing parent or two-wheel rider. There’s a lot of shoving and get-out-of-my-way attitude amongst the birds, and harsh, loud cries. These are the same crows that have always been regarded as a menace by farmers. Their bodies shot and nailed to barn doors. Then, there’s that word “scarecrow”. Not that I’m likely to run into such old-clothed figure here, on the Rec. But with their big, scrawny feet bouncing across the grass, and their high-pitched, shrill calls, crows elicit revulsion in some people. In the same way they’re tearing the refuse bags now, they’re also capable of tearing flesh.

My trainee arrives. She, too, scares them away momentarily with her bicycle. As we move towards the traffic model area, I turn around one last time. I notice a look of defiance and pride coming from one of them. As if it were telling me that should all or most birds disappear, they’d be the last ones to go. If, that is, they did go. I don’t know why, but it somehow feels reassuring.