No wonder April was the cruellest month for T. S. Eliot. Just the temperature see-saw is enough to drive one bonkers. Perhaps the great poet, had he been alive, would have had a different view on the fourth month of the year, if only he had popped down to the Village Underground in Shoreditch to watch Ariwo on Monday 23rd April as part of the La Línea Festival. The quartet-turned-quintet on the night (saxophonist Binker Golding was a special guest) produced one of the most exhilarating and rousing sets I have seen for a long time.

More than mere fusion, Ariwo specialises in a hitherto little-explored musical phenomenon: that of the crossover of electronica and Afro-Cuban beats. Except for the Cuban maverick Edesio Alejandro in mid-to-late 80s Havana, this territory still remains semi-virgin. The band’s emphasis on sound (hence the name Ariwo, which translates as “noise” from Yoruba) is evident all the way throughout their set, rendering the concert a deep sonic experience. 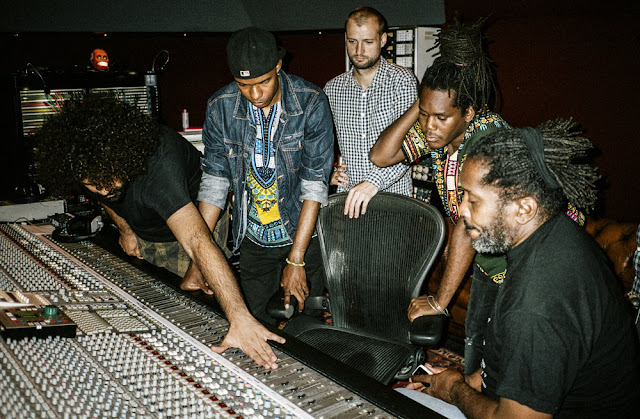 With personal biographies boasting both musical virtuosity and critical acclaim, Monday night was always going to feel special. What nobody could foresee was how special it became with each song being lapped up by an ever-hungry and knowledgeable audience. Gahambar’s trumpet-driven, looped groove transported me back to Havana’s carnival, floats parading up and down the Malecón, feet and hips moving endlessly and beer flowing freely. Caldera presented us with the sight of Yelfris, stalking the stage like a panther, trumpet in hand and ready to launch into a mano a mano with Hammadi Valdes on drums. To Earth showcased Binker Golding’s mastery on saxophone; his drifting riffs a cross between Ornette Coleman and Steve Coleman and yet distinctive in their own complexity. The track Alafin brought a rousing solo on congas by Orestes Noda, not just one of the finest Cuban musicians in his own right, but also an outstanding promoter of Cuban culture in the UK and Europe. And holding it all together, whilst at the same time providing some of the more spiritually enriching melodies on the decks I’ve heard for some time, was Iranian-born Pouya Ehsaei. No mean feat when you have some of the better jazz cats in the UK today challenging each other and upping the ante to the nth degree. Not all tracks were dance-friendly, though. There were a few eyes-shut, fists-clenched, much-welcome meditative moments, too.

Yes, Tom, maybe, April is the cruellest month. But it needn’t be. Especially when you have Ariwo to warm up the most inclement of spring nights.