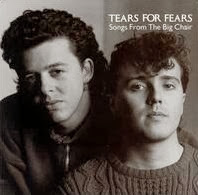 Back in the summer the author of this blog asked his readers and fellow bloggers whether they were children from the 60s, 70s or 80s. The enquiry was related to the clip he’d uploaded on this occasion.
Now it’s the turn of Killer Opening Songs to reminisce. Born in the 70s but hooked on 70s music, it was in the 80s when our Introductory Track With Murderous Intentions got its mojo on the dancefloor. From Madonna to Miami Soundmachine, K.O.S was the soul of the party. And then Shout happened.
Understand that this was the era of synthesisers. Soft Cell and Human League ruled the charts with their portable consoles, modifying and altering the soundscape of the post-punk musical world. Smoke on stage was everywhere, a legacy of 70s prog- and glam-rock. And in the midst of this mist Shout broke through.
Killer Opening Songs still remembers the night it first heard this anthemic melody by the British band Tears for Fears. It is sure it came upon it at a party in El Vedado, a neighbourhood in Havana quite renowned for its cool parties in the mid-80s. The chorus came first: “Shout, shout/let it all out/these are the things I can do without/Come on, I’m talking to you, come on. Cue people on the dancefloor pointing their finger at their dance partner.
Shout was the sound of an adventurous band. One that, sadly, didn’t get its due credit at the time. The album, Songs from the Big Chair, was a marvellous blend of pop chart hits and soundtrack quality B-sides. Take another single, Everybody Wants to Rule the World, slower than Shout and with a more foot-tapping beat to it. Mother’s Talk and I Believe were two gorgeous melodies that deserved more airplay in their day. Overall this was an album that was not afraid of sounding modern.
The key as usual was the Killer Opening Song. A powerhouse of a tune, Shout was mind-addictive in its time. For weeks (months, even!) after all K.O.S did was repeat the chorus ad nauseum. Almost literally, to the point of nausea. Our Introductory Track With Murderous Intentions could even mimic the mid-song keyboard solo. Forget air-guitar, this was air-piano.
There are many songs which could sum up the 80s. However, you would be hard-pressed to find a better example of a song that captured the zeitgeist of this decade like this classic, timeless pop (yes, pop!) feisty number. Ladies and gentleman, join K.O.S. in the chorus:
Shout, shout/let it all out/these are the things I can do without/Come on, I’m talking to you, come on.
© 2013
Next Post: “Sunday Mornings: “Coffee, Reflections and Music”, to be published on Sunday 6th October at 10am (GMT)